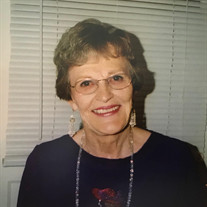 Patti Hinckley Newell died August 1, 2019 of natural causes at her home. She was 90 years old. She was born July 21, 1929 to Claude and Mildred Hinckley in Provo, Utah. She graduated from Provo High School. Married: Paul White who had 2 sons; David White (Pat) and Doug (Sandy) They then had 5 children of their own: Pamelaune Kifer, Kristine (Dann), Ronald (Naomi), Cindee (Lawrence) and Rebecca (James Smith). She worked for Dr. Metcalf in Salt Lake City as a medical secretary for 17 years. Paul and Patti divorced and Patti later married William Rakoczy. After William’s death she married John Newell and they relocated to Southern California where Patti worked as a medical transcriptionist. After they both retired they moved back to Sandy, Utah in 2005. Patti was a very vibrant and active soul. She was active in High School Drama Club. She was very adventurous. Some of her adventures include: Riding in hot air balloons, building Igloos and sleeping in them, repelling in Colorado, rafting at Jackson Hole, and traveling around the world. She had a passion for dancing and won many awards for her graceful Ballroom dance abilities. John and Patti enjoyed square dancing together. They traveled and attended many square dancing events throughout the United States and internationally. She SHOULD have received awards for her elaborate and amazing Square Dancing outfits. One of Patti’s greatest attributes was not engaging in gossip. You would not hear her utter anything distasteful or disrespectful about anyone! Yep, our Patti was a very classy and kind woman. She also taught her children how to cook, sew, and keep a clean house, among other life skills. Patti is survived by her husband of 31 years, John Newell, his daughter Launda Reiss and her 2 sons, and Patti’s 2 brothers Mike Hinckley and Jerome Walker. She was preceded in death by her brother Chad Hinckley. Patti had five children with Paul M White: Pamelaune, Kristine, Ronald, Cindee and Rebecca and raised two stepsons with him, David White and Doug. She was blessed with 15 grandchildren, 29 great grandchildren and 14 great-great grandchildren. She made many splendid memories with her grandchildren whom she loved and adored. Services will be held Saturday, August 10, 2019 at the East Ridge Fourth Ward Chapel, located at 11777 South Willow Wood Drive, Draper, Utah at 1PM. A gathering of family and friends will begin at noon prior to the service.

Patti Hinckley Newell died August 1, 2019 of natural causes at her home. She was 90 years old. She was born July 21, 1929 to Claude and Mildred Hinckley in Provo, Utah. She graduated from Provo High School. Married: Paul White who had 2 sons;... View Obituary & Service Information

The family of Patti Hinckley Newell created this Life Tributes page to make it easy to share your memories.