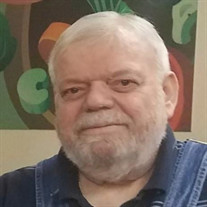 Our Elder Brother, Paul Lorin Bawden, passed away March 30, 2019. He was born to Lucille and Dale Bawden on July 1, 1948, in Salt Lake City, Utah. After graduating from Granger High, Paul served in the Navy from July 1968 to June 1972. He served in Vietnam, Spain, and Australia. He was in the Naval Reserve for two years afterwards. Paul loved the training that he acquired while in the Navy and he excelled in it. After the Navy, Paul worked at Kennecott Copper. He married Suzanne Schroyer in November of 1974 (later divorced). Paul worked at Tooele Army Depot, Dugway Proving Grounds and Hill Air Force Base as a Boilermaker, HVAC Tech, and Welder. He was very skilled in his profession and was a dedicated, hard worker despite his health concerns. He retired in 2008. Paul loved automobiles, especially the classics. He enjoyed going deer and elk hunting, until he couldn’t do it anymore. He loved shooting and gave lessons to a lot of his family and friends. Paul had many good friends and neighbors whom he loved and appreciated. He had a special bond with his nephews David Bawden and Paul Bawden II, niece Melanie Richins, and great niece Mikaylee Wayman. Paul is survived by his four siblings: Dee Jay (Deana) Bawden; Debby (John) Stevens; Shelley (Alvin) Crown; and Brian (DeAnn) Bawden. He is preceded in death by his parents; Brother Lon Bawden; and Nephews Joshua and Spencer Bawden. Paul will be deeply missed by all who knew him. A Celebration of Paul’s Life will be held Monday, April 8, at 6:00 p.m. at Bennion Heights LDS Ward, 3555 W. 5620 S. Taylorsville (casual dress). Interment will be at 11:00 a.m. on Tuesday, April 9, at the Utah Veterans Cemetery & Memorial Park, 17111 South Camp Williams Road, Bluffdale.

Our Elder Brother, Paul Lorin Bawden, passed away March 30, 2019. He was born to Lucille and Dale Bawden on July 1, 1948, in Salt Lake City, Utah. After graduating from Granger High, Paul served in the Navy from July 1968 to June 1972. He... View Obituary & Service Information

The family of Paul Lorin Bawden created this Life Tributes page to make it easy to share your memories.