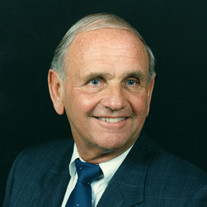 Paul “Bud” Dayton Davis (91 years) passed away peacefully on February 24, 2019 in Sandy, Utah. He was the son of Paul Jasperson and Cuba Dayton Davis. He lived a full, adventurous, and athletic life. Paul was born June 13, 1927 in Provo, Utah and spent his early years in Payson. He enjoyed fishing and hunting with his father and cousins. He was a gifted athlete, excelling in basketball, baseball, football, tennis and track. He was selected first team all-state in basketball and helped Provo High win two state championships. After High School, he immediately enlisted in the Navy and served through the duration of WWII. He attended BYU and played on the basketball team. He picked up golf in college and was a natural. Within a year he was outscoring his instructor, and became captain of the golf team. He earned a degree in physical education. After college, Paul moved to southern California where he taught P.E. and coached a junior high basketball team. He met Gerda Marie Andersen and they enjoyed dancing, tennis, golf, and going to sporting events together. They married in Los Angeles (1957) and raised three children, Lis, Paul, and Cary. Later divorced, they remained friends until her death in 2010. Paul won several local golf tournaments and worked to become a PGA-certified golf professional and manager. His golf career took him to courses in Southern California, Sacramento, and Ohio. In January 1971, he became the Head Golf Pro at Glenmoor Golf Course in South Jordan, Utah. Later in his career, he worked at military golf courses throughout the world including Hill Air Force base, in Utah and bases in Arizona, California, Germany, and Spain. He also enjoyed traveling throughout Europe and the U.S. with his close friend Christine from Germany. During his senior years, he kept active working with network TV stations at major golf tournaments, and being a ranger at PGA West Golf Course in Palm Springs, California and at River Oaks in Sandy, Utah. He enjoyed playing golf into his 70's and 80's. During his life in golf he made an astounding 7 holes-in-one. He enjoyed spending time with family for holidays, and special occasions. He also loved to attend his grandchildren’s sporting events. He was preceded in death by his parents, sister Beverly Davis Jameson, and half-sister Annie Althera Davis Mulkey. He is survived by his children Lis Davis (Howard) Green, Paul Eric (Andrea) Davis, and Cary (Brenda) Davis, and grandchildren Mitchell, Stephanie, Lindsay (Ben and great grandson on-the-way), Jordan (Katelyn), McKenzie (Nadan and great grandson Bennett), Sydney (Cameron), Carson, Preston, and Dayton. A viewing will be held on Saturday March 2nd at 11:00 a.m. at the Eastridge Ward, 5235 S. Wesley Road, Murray, Utah, followed by a Celebration of Life at 11:30 a.m. Interment at Elysian Burial Gardens, 1075 E. 4580 S.

The family of Paul "Bud" Dayton Davis created this Life Tributes page to make it easy to share your memories.