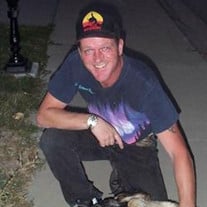 Our big-hearted, free-spirited son and brother, Paul, passed away Tuesday, March 4, 2014 from the effects of pancreatic cancer. He was at his home in Provo, Utah surrounded by his family. Paul was born August 28, 1959 to Kenneth and Helen Cutler, the second of 8 children. Paul was always very curious and fun loving. He spent his childhood in Idaho, Utah, Pennsylvania, and Massachusetts. As a child his pockets were usually full of toys. He played with his trucks often using them to move his sister’s doll furniture around the room. He participated in football and music as a youth. He enjoyed High School in New Hampshire and Maine. As soon as Paul learned to drive he found that this was his passion. He logged millions of miles on the road with his jobs delivering home heating oil in the cold Boston winters, and traveling throughout the country delivering and hauling cars, ice, boats or whatever needed to be moved. He was very proud of his business he recently started in Utah, Paul Cutler Transport, and had many dreams of how he could grow this business. Paul also spent some time working in the oil fields. He was very busy with many endeavors, often sacrificing by taking holiday and overtime shifts so that others at his company could spend that time with their families. Paul always loved animals. He had many dogs throughout his life- Carmen, Bear, Booboo, Cinnamon, Danger ( who lived up to her name and was wanted in 4 states), Taco Bell, Trooper, to name a few. He loved to spoil them by cooking beef for dinner and sharing it with them. He enjoyed people and had a compassionate heart. He would meet someone and soon would consider them a close friend. Paul’s life was full of adventure. He sought to go places and see things, and knew many roads throughout the country. He travelled to Alaska, Hawaii and Canada. On a week-long trip to Hawaii with his parents they jointly put on about 4000 miles on a rental car in Oahu, as his parents drove by day then he drove by night. This surprised the rental car agent since the Island is only about 30 miles long. On another trip driving from Alaska to Utah, he put a sign on his car that said “eat moose, 10,000 wolves can’t be wrong.” He loved the mountains and cowboys and the protection he felt from wolves. He enjoyed spending time in his RV, and going places and meeting new people at campgrounds. He liked to set up the campground with lights. Paul had several cowboy hats that he loved to wear that magnified his persona. Paul leaves behind many people who deeply loved him and who will greatly miss him. He leaves his girlfriend, Betty Scott, who he rightly said is so full of fun and “overwhelming personality” she could get a job or do anything she wanted, especially with her charming Boston accent we all love. He leaves behind his parents, Kenneth and Helen Cutler, and 6 of his siblings, Laura Leigh Cutler, Julie Ann Redd (Brandt), Mary Elizabeth Aust (David), Cynthia Jean Lewis (Randy), John David Cutler (Sarah), and Rachel Marie Crandall (Myron). His sister, Christine Lynne Horne (Scott) preceded him in death 15 years ago, and he will be buried by her side in the Provo City Cemetery. Paul also leaves behind 42 nieces and nephews. Paul lived larger than life with many tales to tell. In his final weeks as he battled his cancer and felt it fighting “like monsters inside of him”, he was grateful that he was given a few weeks before he passed away to reflect on what is important in life, and return to the principles of the Gospel he learned in his youth. He told us he had turned his life to Jesus and just wanted to do His will. We will miss him greatly, but are grateful to know that he will live again. A memorial service will be held for Paul to celebrate his life on Saturday, March 8, 2014 at the LDS Oak Hills Hillside Chapel, 2000 North, 1500 East in Provo, Utah nestled close to the mountain just south of Rock Canyon.

Our big-hearted, free-spirited son and brother, Paul, passed away Tuesday, March 4, 2014 from the effects of pancreatic cancer. He was at his home in Provo, Utah surrounded by his family. Paul was born August 28, 1959 to Kenneth and Helen Cutler,... View Obituary & Service Information

The family of Paul Reed Cutler created this Life Tributes page to make it easy to share your memories.