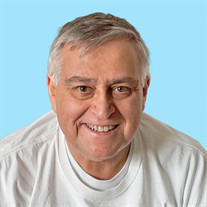 Paul Greenlee, aged 61, passed away Wednesday, February 16, 2022, at 12:41 p.m. at Davis Hospital after suffering sudden cardiac arrest. Born in Oak Park, Illinois, to parents Marietta DiSabitino and Paul Thomas Greenlee Senior, Paul was born and raised a Midwest farm boy who loved his family and valued them more than anything. He married his wife, Jody Odell Greenlee, on January 24, 1998, and together they raised two children, Jennifer and Joshua, through their 24 years of marriage. Paul was a good father, husband, son, and uncle. He will be deeply missed by his friends and family, and he meant much to those whose lives he touched. Paul made this world a better place by being a part of it (and usually the jokes he put into it), and it is already a little dimmer and has less laughter without him in it. Paul was many things to those that loved him: loving, kind, generous, and only a little stubborn. His spirit touched all those around him and made them feel at home in his presence. His quick smile and love of stories brought out anyone’s inner child. Those who knew him and loved him cannot express the joy he brought into our lives nor the grief we now feel with his passing. During these last several years, he was plagued by painful and constant symptoms, causing him to be in and out of the hospital for weeks at a time. We witnessed miracles as he went to war with his own body to come home to us. But now, it was his time to lay down his load and return to Heavenly Father and His Son who welcomed him home with outstretched arms. He will never know pain again, and he has a peace and strength that he could not know while still on Earth. We love him, and we will never stop missing him, but we have the comfort of knowing he is finally well. A host of angels waited for Paul as he joined his father, grandparents, and several very excited bulldogs. He continues to watch over his wife, his two kids, Jennifer and Joshua, his mother, Marietta, his two brothers, Timothy and Eugene, and niece, Lindsey, and nephew, Clayton. His service will be a graveside held on Tuesday, February 22, 2022, at 11 a.m. at the Clinton City Cemetery. The service will also be available on Zoom.

The family of Paul Thomas Greenlee Jr created this Life Tributes page to make it easy to share your memories.