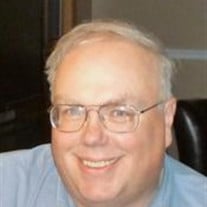 Paul Wadsworth Hinckley was born January 26, 1958, in Salt Lake City, Utah, the sixth child of Sherman Bitner and Jo Wadsworth Hinckley. He died from complications of diabetes at his Salt Lake City home the morning of June 28, 2013, at the age of 55. Paul attended Highland High School and later graduated from the University of Utah with a Bachelor Degree in Physics. He served an LDS mission in North Carolina. He loved to prepare gourmet foods and share his creations at family parties. While attending the University he worked for Primrose Sontag, a jewelry wholesaler. He then moved to Panaca, Nevada and worked as the on-site manager of Panaca Power and Light for nearly 15 years. After returning to Salt Lake, he worked for Zions Securities Corporation, a property management company. At the time of his death he was a project/service manager for Associated Time & Parking Controls. Over the years he worked side by side with his father on various projects in Panaca, Nevada; Rico, Colorado; and Cove Fort, Utah. Like his father, Paul was known for his "silent" laugh. Paul’s fun sense of humor was often directed to the nieces and nephews, who in turn enjoyed the attention from Paul. He was very creative and ingenious in finding solutions to difficult problems. He will be missed by all who knew him, especially those who called him to ask, “Paul, how do you do this?" Paul is survived by his siblings: Francie Smith, Helen (Sandy) Newman, John (JoAnn) Hinckley, Stuart (Angie) Hinckley, Wayne (Vicki) Hinckley, and Jean (David) Flores; 28 nieces and nephews and their spouses and children, all of whom love and respect him, and enjoyed spending time with him. He was preceded in death by his parents, Sherman B. and Jo W. Hinckley, and a brother-in-law, Stephen Smith. Family and friends are welcome to attend a short graveside service to be held Saturday, July 6, 12:00 noon, at Wasatch Lawn Memorial Park, 3401 S Highland Drive, Salt Lake City.

The family of Paul Wadsworth Hinckley created this Life Tributes page to make it easy to share your memories.