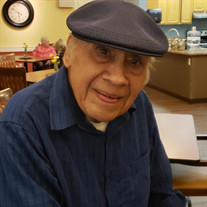 Paul DeLeon Hinojosa June 30, 1927 – December 5, 2020 After a long and eventful life, Paul DeLeon Hinojosa, beloved father, grandfather, brother, and friend, passed away on December 5, 2020, at the age of 93, of complications from COVID-19 and dementia. Paul was born June 30, 1927, in San Antonio, Texas. Paul was preceded in death by his parents Juan Hinojosa and Zapopa DeLeon; his brothers John and George; his sisters Tomasita, Delia, Ofelia, and Estela; his wife Lupe Aguayo; his daughters Alice Mascarenas and Helen Fender; his sons Michael, Raul, and Bruce Hinojosa; and his grandchildren John Paul Hinojosa, Tyler Hinojosa, and Derek Paul Hinojosa. He is survived by his brother Jesse (Mary) Hinojosa of Boerne, Texas, and by his sons Paul (Mykin) Hinojosa Jr., Monty (Brenda) Hinojosa, and John Hinojosa. Paul was a hard worker and labored in many jobs in and around San Antonio in his youth. He spent several summers picking cotton and worked for Dairyland Dairy as a delivery man. He also cleaned at the Majestic Theater, where he could watch movies all day in an air-conditioned building. He worked various jobs at government installations in the San Antonio area. He loved serving his country with the U.S. Army Air Corps, including when he served in the Pacific Ocean theater in Japan during World War II and other various stations, until his discharge in 1947. After the war, Paul went to work in the coal mines in Sunnyside, Utah. It was here he met and married Lupe Aguayo. Paul and Lupe lost two infant sons, Raul and Michael, in 1950 and 1951. They briefly moved to San Antonio, where Paul Jr. was born in 1952, and then moved back to Sunnyside, where Alice was born in 1953. The family then moved to Layton, Utah, and Paul began work on Hill Air Force Base. It was here that Helen was born in 1954. Five years after Lupe’s death in 1957, Paul married Marlene Hinchcliff and adopted her sons Bruce, John, and Monty. They divorced in 1974. In later years, Paul had marriages to Teddy Velarde and Eva Lilley, and he found companionship for several years late in his life with Carole Detamore. Paul worked for the Civil Service in various positions in logistics management, depot maintenance, and depot supply, and retired in 1988 after an impressive 39 years of federal civil service. He received several Certificates of Recognition for his excellent work. Paul endured much hardship in his life, including the tragic deaths of his wife and several children. In 1962, he was involved in a near-fatal car accident in Farmington, Utah. His prized 1957 Chevy slammed into the overpass at highway speed. Paul survived but was in a full body cast for over nine months. Then, shortly after his retirement, he successfully underwent quadruple heart bypass surgery. Despite these hardships, Paul loved life and was the life of any party. Paul was a character, known for his catch phrase: “Good Griff.” He loved to dance and show his moves whenever there was music playing. Most of all, he loved mariachi music from San Antonio. His favorite was “Volver Volver.” Paul became an avid golfer in his retirement and loved to play in tournaments with his friends in the Chicano Golfing Association. He also loved to go to Nevada’s casinos in Reno and Wendover. His favorite game was blackjack, and he became very skilled in it, winning several blackjack tournaments. The family is indebted to the staff at Chancellor Gardens Assisted Living in Clearfield, Utah, where Paul was a resident since 2012, when he was diagnosed with Alzheimer’s disease. Special thank you to Sallie Huntington, Director of Memory Care, the wing where Paul resided during the last five years of his life. We appreciate the efforts of the nursing staff and aides, who were truly a great blessing to Paul. We know he was happy living there, and his life was extended because of their care. Words cannot express the gratitude for those who watched over him and provided sweet, compassionate, and professional care through the years: ensuring he took his medications, preparing meals for him, keeping him well-groomed and well-dressed, and providing company, comfort, and entertainment. We acknowledge, and also appreciate, Signature Healthcare and Symbii Healthcare, whose nurses and aides cared for his personal hygiene throughout the week. Special thanks to aides Katelyn, Brynn, Andrea, Tina, Katie, Bailey from Signature Healthcare and Rosa, Ashley, Michael, Brooklyn, Kiara, Vangie, and Lexi from Chancellor Gardens and over the years so many others. Thanks also to his hospice nurses, Callie and Emily, and to the others who looked after him and provided different cares and services. Funeral and memorial services will not be held at this time due risks posed by COVID-19. Interment will be held in 2021 in San Antonio, TX.

The family of Paul DeLeon Hinojosa created this Life Tributes page to make it easy to share your memories.