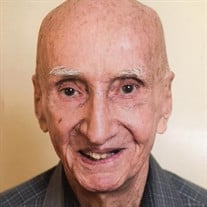 Paul Forrester Hood, beloved father, grandfather, brother and uncle, passed away peacefully in his sleep in Salt Lake City, Utah, on March 17, 2018, at the age of 91. He will be greatly missed. Paul was born in Philadelphia, PA, on August 13, 1926 to William Paul and Kathryn Henderson Hood. He attended and graduated from West Philadelphia High School (Philadelphia, PA) and Brown University, (Providence, RI) in 1949 with a B.S. degree. During his years at Brown, he enlisted in the U.S. Navy where he toured the Far East on board the USS Tonkawa. After serving his country, Paul had several jobs over the years in the financial services, pension and retirement areas with Aetna Life & Casualty, Towers Perrin, Equitable Life, Marsh & McClennan, The Wyatt Company, EBASCO, Merrill Lynch, Schroeder Nasse and Thomas, Rhode Island Hospital Trust National Bank and Raymond James. In the later part of his life, he was a governmental expert witness in Washington, DC. A full-time resident at Highland Cove, Paul had lived in Armonk, NY, Charlotte, NC, Weston, CT, Warren, RI, and Richmond, VA, before moving to Salt Lake City in the late 90’s to help raise his young grandsons. He had a great sense of humor, loved playing tennis, reading about the Civil War, watching golf, and being outdoors. He was also dedicated to service which included his lifelong participation in the Presbyterian church. Paul was cordial and uncomplaining to the end. As a veteran of the U.S. Navy, arrangements have been made for him to be buried at sea in a Naval ceremony off the coast of Honolulu, Hawaii. He is survived by his brother, Ralph Henderson Hood (Doylestown, PA); son Bradford and Tami Hood (Charlotte, NC) and granddaughters Hayley Grace Hood (Charlotte, NC) and Amanda Kathryn Hood (Charleston, SC); and daughter Tracy Hood Golden and grandsons Matthew Finn Golden and Keene DeArment Golden (Salt Lake City, Utah).

Paul Forrester Hood, beloved father, grandfather, brother and uncle, passed away peacefully in his sleep in Salt Lake City, Utah, on March 17, 2018, at the age of 91. He will be greatly missed. Paul was born in Philadelphia, PA, on August 13,... View Obituary & Service Information

The family of Paul Forrester Hood created this Life Tributes page to make it easy to share your memories.