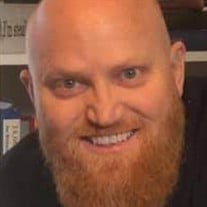 Paul Emron Hunsaker (46) was born to Wayne Lewis Hunsaker and Jean Wright Hunsaker (deceased) on July 30, 1975 in Logan, Utah. He left us much too early on August 15, 2021 while living in Draper, Utah. Paul is survived by his son, Brennan Paul Hunsaker, and his daughters, Cora Hunsaker and Monroe Lee Hunsaker; his father Wayne Lewis Hunsaker, siblings Shaun (Tracy) Hunsaker, Brenda (Michael) Olsen, Brian (Bobbi) Hunsaker, Sheri Hunsaker, Val (Kristy) Hunsaker, Carl (Sandee) Hunsaker, Marie (Dax) Fossum. At the age of four Paul’s family moved from Elwood, Utah to Hyrum, Utah where he spent the rest of his childhood. Paul participated in all church and scouting activities earning his Eagle Scout award with the Boy Scouts of America. He attended Mountain Crest High School where all who knew him enjoyed his gregarious, fun-loving personality. Paul was blessed with a beautiful singing voice and loved participating in show choir and several school plays. He was the male lead in Seven Brides for Seven Brothers, playing the role of Adam Pontipee. After high school Paul served a mission for the Church of Jesus Christ of Latter-day Saints. His mission was unique as he was able to serve in both Australia and Pittsburg, Pennsylvania. Shortly after returning home Paul married Amy Pauline Calvert on 7/24/1999. Together they had two beautiful children, Brennan and Cora. Paul’s kids have truly been his world. Paul loved supporting and cheering on his kids any chance he got. Together they loved watching sports, movies, playing games, and doing tons of family traditions passed on from his mother. Paul would beam as he spoke of their accomplishments, always confirming how much he loved them and how proud he was of them. Paul later married Vanessa Pond 8/12/2017. Together they had a daughter, Monroe. “Rolo” never left her dad's side and Paul cherished every moment they spent together. Paul loved big, gave an honest hug, and will be missed by all who knew him. There will be a private family graveside August 28th, 2021, 11:00am at the Elwood Cemetery, Elwood, Utah.

Paul Emron Hunsaker (46) was born to Wayne Lewis Hunsaker and Jean Wright Hunsaker (deceased) on July 30, 1975 in Logan, Utah. He left us much too early on August 15, 2021 while living in Draper, Utah. Paul is survived by his son, Brennan... View Obituary & Service Information

The family of Paul Emron Hunsaker created this Life Tributes page to make it easy to share your memories.

Paul Emron Hunsaker (46) was born to Wayne Lewis Hunsaker and...