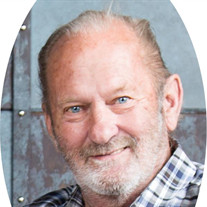 Paul Melvin Jenkins passed away on December 25, 2015 of natural causes at the age of 70. Paul was born March 31, 1945 to Melvin C. and Norma Anna Jenkins in Murray, Utah. Paul graduated from Jordan High School in 1963. He was a reservist in the United States Army. He married the love of his life, Jody Ruth Andrus and was later sealed in the Jordan River Temple. Paul was employed by the Denver Rio Grande/Union Pacific Railroad for over 41 years as an electrician. For many years, Paul worked a side business he had inherited from his Dad snow plowing and tilling gardens. After retiring from the railroad, he began his new career in daycare for his grandchildren, who he adored. Paul’s true passion was spending time with his family, especially fishing and hunting. Paul had many hobbies; he enjoyed playing cards, fishing, watching sports (go Duke, BYU, and Broncos), fishing and spending time at the cabin in Island Park, Idaho because he could spend time fishing. Paul’s love for the Savior helped him overcome many of the life challenges that he faced. He thoroughly enjoyed teaching the High Priest Group as well as his calling in the Nursery in the Sandy 1st Ward. Paul found great joy in serving others and he wouldn’t hesitate to help anyone in need. Survived by his wife, Jody. Children: Aaron (Chantel), Bret (Brittany), Cody (Gen), Marni (Matt Fisher), HayLee (Heath Shurtleff), and RaShea (Jordan Drake). Grandchildren: Memerice (Nathan), Shelby, Lorilie, Gretchen, Corbin, McKay, Miley, Bailey, Jameson, Maryn, Harrison, Paul, Hudson, Bryten and one on the way. Sister Janice Rasmussen and brother David. Preceded in death by his parents, sister Mary. Funeral Services will be Tuesday, December 29th at 11:00 a.m. at the Sandy 1st Ward LDS church, 220 E. 8680 S., Sandy, UT. Viewings will be held on Monday, December 28th from 6:00 to 8:00 p.m. as well as Tuesday, December 29th at 9:30 to 10:45 a.m. at the same location. Interment will be at Larkin Sunset Gardens in Sandy, UT.

Paul Melvin Jenkins passed away on December 25, 2015 of natural causes at the age of 70. Paul was born March 31, 1945 to Melvin C. and Norma Anna Jenkins in Murray, Utah. Paul graduated from Jordan High School in 1963. He was a reservist in... View Obituary & Service Information

The family of Paul Melvin Jenkins created this Life Tributes page to make it easy to share your memories.