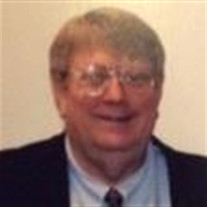 Paul Arthur Johnston, 68, died peacefully at home on Sunday February 24, after a challenging battle with congestive heart failure. Paul was born in Superior, Wisconsin on August 25, 1950 to Lawrence William Johnston and Helen Schean Johnston. He grew up in Superior, loving the woods, lakes, and Green Bay Packers. Paul graduated from Superior Senior High School, attended University of Wisconsin, Superior, then Brigham Young University, where he earned a BA in History and Spanish. He later completed an MA in Educational Administration at University of Utah. He worked at home in the Merchant Marine, sailing iron ore boats on the Great Lakes, which enabled him to pay entirely for his LDS mission to North Argentina. Following his mission, he married Susan Hamblin on September 10, 1973 in the Salt Lake LDS Temple. They were blessed with three daughters, Julie, Jessica, and Rachel. After graduation, Paul enlisted in the US Army. He was recruited into an Army Intelligence unit, and served his enlistment on a NATO base in Naples, Italy. After his discharge, Paul began a long career in teaching. He taught high school Social Studies and Spanish in Mountain View, Wyoming, Superior, Wisconsin, and many years at Brighton High School in Cottonwood Heights, Utah. Paul was a gifted, enthusiastic educator who loved his work, and his students loved him in return. Paul served faithfully in many church callings, including Elders Quorum President (multiple times), High Priest Group leader and instructor, Branch Presidency counselor, YM counselor, Gospel Doctrine instructor, and exceedingly faithful Home Teacher. In his free time, Paul enjoyed swimming, studying and discussing world history, working in his yard, riding his motorcycle in the Wisconsin countryside, and building houses with his brother. He loved his family and the frequent activities spent with them all. He remained stalwart in his faith and love of the Gospel all his life. Paul is survived by his wife Susan; daughters Julie Nielson, Jessica (Bret) Young, and Rachel (Steve) Olsen; grandchildren Abigail, Cameryn, Jared, David, Josh, Corban, Asher, Lars, Isaac, Logan, Gwyneth, and Audrina; his siblings Barbara (Tom) Fredrick and Larry (Vickie) Johnston. He was preceded in death by his parents. We will miss Paul and look forward to reuniting with him again. Funeral services will be held Friday, March 1 at 11:30 am South Jordan, UT at the Country Park Ward Chapel, 11251 South, 2700 West, South Jordan, Utah. A viewing will be held one hour prior to the service at the chapel. Interment will be at the Utah Veterans Cemetery, 17111 South Camp Williams Road, Bluffdale, Utah.

The family of Paul Arthur Johnston created this Life Tributes page to make it easy to share your memories.