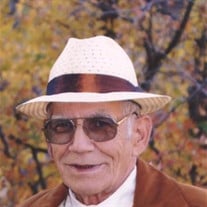 Paul Lester Krass Sr. 1933 - 2016 Paul Lester Krass Sr., 83, of Orem, Utah returned to his Heavenly Father Friday, September 9, 2016. He passed away surrounded by close family members. Paul was born February 28, 1933 in Havre, Montana to Carl and Alta (Mathews) Krass. He lived in Harlem where he was raised on a farm, attended school, and met the love of his life, Janamay Alcorn. He proudly served in the military for two years before marrying his bride, Janamay, on May 11, 1957 in Harlem. They were later sealed in the Idaho Falls LDS Temple. For ten years Paul managed a large wheat farm in Great Falls. During the winter months he would sneak in to town to work at an auto mechanic shop to earn extra money for his family. In 1971 he changed careers and began managing a muffler shop. In 1992, Paul and Janamay moved to Orem, Utah to be closer to their grandkids, whom he enjoyed spending time with. Paul was a member of The Church of Jesus Christ of Latter Day Saints and served in many great callings. Some of Paul’s many hobbies were gardening, fixing cars, refinishing furniture, and daily trips to Deseret Industries or Salvation Army. He always felt, “One man’s trash is another man’s treasure.” Paul was a simple man and had a heart of gold. He was not a man of many words, but he sure left a lasting impact. Paul is survived by his son, Paul (J’lene) Krass Jr.; daughter, Crystal (Clayton) Chadwick; his sisters, Ileane (John) Bellecci and Carol (Thomas) Hoffman; 8 grandchildren and 17 great grandchildren. He was preceded in death by his parents; brothers, Bernard Norheim, Gene Krass, and Jim Krass; sister, Ann Norheim; son, Karl; and his wife, Janamay Alcorn Krass. A viewing will be held from 6:00 to 8:00 PM on Thursday, September 15, 2016 in the LDS Chapel at 80 South 280 East, Orem Utah. Graveside services will be held on Friday, September 16, 2016 at 11:00 AM at Utah Veterans Cemetery and Memorial Park at 17111 South Camp Williams Rd, Bluffdale, Utah.

The family of Paul Lester Krass Sr created this Life Tributes page to make it easy to share your memories.