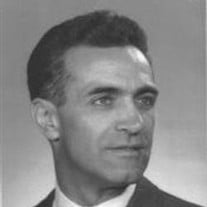 PAUL A. SALVO January 24, 1924~June 25, 2014 Paul was born in Philadelphia P.A. January 24, 1924. Son of Italian immigrants, Frank and Josephine Salvo. He married the love of his life, Betty Scheib of Salt Lake City, on January 15, 1949, with whom he enjoyed 64 wonderful years. His lengthy list of achievements began atop an orange crate cutting hair in his father’s barber shop in Bridgeton N.J.. Under his father’s tutelage he earned his master barbers license. He excelled early in all team sports pursuing and achieving a high level of excellence throughout his high school and college careers. Following his service in India, as a member of the Army Air Force during WWII, he was stationed at H.A.F.B. controlling air traffic, and Wendover loading cargo planes. He returned to Utah after his time in the military where he married, started his family, and completed his education at U.S.U.. He later earned both his Bachelors and Masters degrees from the same institution. His devotion to his roots returned him to his childhood home, his family in tow, during summers away from teaching in Utah. Though teaching and coaching were his primary interests, at his father-in-laws behest, being an agent himself, Paul was accepted and graduated from the F.B.I. academy in Quantico, VA in 1951. Serving only a short time as an agent Paul was again called to service during the Korean War. Honorably discharged from his second time in the military he return to Utah where he began an illustrious career doing what he loved most. The remainder of his life was spent touching the lives of others as a Utah educator, administrator, and most importantly coach. Of all the disciplines he involved himself in basketball was his true love, and one he treated as a science. Only those that played for him, and worked beside him, can truly understand the depth of his devotion to the player, and the team of which they were a part. In 2000 he was inducted into the Utah Sports Hall of Fame. Though he did more than most he never believed he had done enough. Consumptive rigors of vascular dementia plaguing his later years took him from not only his family, but a community of people he devoted his life to that in return showed him unwavering loyalty. Paul was proceeded in death by his parents Frank and Josephine Salvo, his younger brother Thomas Salvo, and his eldest son Michael Salvo. Surviving Paul are wife Betty Salvo, sisters Grace Meyer and Marie Sisco, sons Bruce and Lori , Patrick, Frank and Sheila, John, and daughter Lisa and Nick Prout. He is also survived by fifteen grandchildren, twelve great grandchildren, and many nephews and nieces. Honoring Paul’s request he was cremated and no services will be held. The family would like to express a special thanks to Hearts for Hospice for their compassionate assistance. Our dear father, husband, and friend passed away in his home in the presence of those that loved him.

The family of Paul A Salvo created this Life Tributes page to make it easy to share your memories.