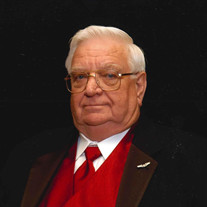 Paul Edward Starkey 1934 - 2020 Paul Edward Starkey, 86, of Orem, Utah went to be with our Lord and Savior on April 24, 2020 after a valiant fight with pancreatic cancer. He was born on February 19, 1934 in Little Rock Camp, WV to the late Charles Starkey and Freda Stier Starkey. Paul was preceded in death by his wife, Shirley Mae McAtee, whom he married March 14, 1953. Paul is survived by his two daughters, Kathryn Starkey and Paula Starkey Duerden: three granddaughters, Pepper Duerden, Crystal Duerden and Brandi Duerden Bowden and her husband Beau Bowden. He is also survived by four great-grandchildren; Jayden Parry, and Jessica, Elsie and Braxton Bowden; one brother, Lawrence “Larry” Starkey and his wife Bobbi; a special nephew, Roger Dale Starkey and his wife, Sherry, and several other nieces and nephews. Along with his parents Paul was preceded in death by his wife Shirley; sister, Levada June Starkey, brother, Charles R. Starkey, and Sister Emma M. Clevenger, and special nephews Denver Ray Starkey and Anthony Francisco-Starkey. Paul loved singing and started back in the church as a boy and performed with his high school choir as a youth. He had the opportunity, as a high school choir member to travel to San Francisco, New York City and The White house to perform under the direction of the beloved choir director “Fritzie.” He was known for his many poems and stories and his beautiful singing voice. A few of his poems have been used by country artists in their music. He was always ready for a song, a dance or a good story. He made instant connections with people and most everyone who met him considered him a great friend. If you were in need of anything, he was always there to help. Paul started his career at G. C. Murphy’s in the management program. He worked for them for nineteen years located in several states; West Virginia, Virginia, Georgia, Texas and Ohio. After all the moving and the death of his sweetheart, he decided to move to Utah to be near is daughter Paula and husband Paul and granddaughter Pepper. He started a second career in Utah working for Phone Directories Company in sales, advertising and management. He enjoyed many years traveling all over the country with very special friends. We would like to thank the amazing people at Hearts for Hospice who have helped care of dad so lovingly these past ten months. The whole staff is amazing, but we especially want to extend our gratitude to his nurses; Kristee, Angie and Roy, his aide Jaden, his chaplain Bryce, social worker Sarah, Shannon and Jacob his wonderful volunteers and music therapist Amylee. They made him feel so loved and special. We also want to thank Dr. Craig Cook who helped guide us through this year, Dr. Kent Marshall Paul’s PCP and the other doctors and staff who have given dad wonderful care. Because of the current state of COVID-19, there will only be a burial at this time. He will be interred at Lumberport Lions Club Cemetery in Lumberport, West Virginia. As soon as we can all get together again, we will have a memorial in Orem, Utah and in Clarksburg, West Virginia. We will update at that time. One last request, please share with us your stories, memories and pictures.

The family of Paul Edward Starkey created this Life Tributes page to make it easy to share your memories.