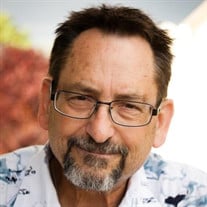 Paul David Turnblom (age 68) husband, father, grandfather, great-grandfather, brother, Christian, photographer, and creative craftsman passed away in his home in Clearfield, Utah, on Monday, March 9, 2020, at 9:25 p.m. after a courageous eight-year battle with multiple myeloma. Paul left this earthly journey holding hands with his sweetheart Sandy, his loving wife of thirty-one years. “They met dancing, “ she said, “and he wouldn’t leave.” He loved her dearly, and they met their daily challenges together. Paul was born in Idaho Falls, Idaho to Palmar Felix and Margaret Applonie Turnblom. His early years were spent in Washington Terrace and Brigham City. He graduated from Box Elder High School. After high school, he started his family in California, and then quickly moved back to Brigham City, where the rest of his five children were born and raised. He proposed to Sandy Thurgood (his second wife and lifetime sweetheart) at the Weber State football game on the jumbo-tron. She was mortified, and he was delighted to broadcast his undying love in front of thousands of Wildcat fans. His family still claims that he “bleeds purple.” Never one to miss a home football or basketball game, Paul became a welcome presence on the sidelines with his camera in hand. His photographs caught the attention of the basketball coaching staff, and he was invited by Cody Olsen owner of WeberHoops.com to be the online action and archival photographer for both Wildcat teams for over four years. He thoroughly enjoyed his work and lived with enthusiasm. He involved his children in Paul’s Party Palace assisting with novelty orders. They remember him singing The Lollipop Guild with helium. He drove for Pepperidge Farms, built Champion homes, worked for Thiokol, and Paint Sundries, and was founding artist for Heartprintz Studios. For the past 23 years, he worked as a merchandiser and service technician for Hillman Fasteners. His co-workers often said that they forgot how sick he was, because he always made them laugh. The Applonie Family Softball Team dictated his summer schedule for more than a decade. The cousins gathered weekly under the watchful eye of Grandma Applonie to run the bases and the opposition into the dust. He cherished time joking with Genno and the boys. Always a kid at heart, Paul sought adventure in unusual places: exploring abandoned houses, hiking Antelope Island, running and flopping Marx Brothers style, sliding down park railings, and skating across frozen sidewalks. His most recent escapade led to a road trip to find the perfect spot to photograph the Big Boy 4014, which came to Utah for the celebration of the Spike 150 Celebration in May 2019. He often carried a backpack of random props that he liked to photograph in random places. He loved to create through woodworking, photography, and digital media. He skillfully played the harmonica, french horn, and the tenor drum. He was also a formidable “dashboard drummer.” Wipeout never sounded better than when he played it on his granddaughter’s bongos. No matter how difficult the challenges facing him, Paul made time to lift through love and positive messages. After the death of his father, Paul began sending positive messages through weekly texts to family and friends. His messages evolved into weekly videos as the Motivational Mutt on his YouTube channel and patriotic messages to his 11,000 Twitter followers. Paul honored the Constitution of the United States and dedicated his talents and energy to upholding its values. He loved nature and lived in gratitude. He often said: “My life is blessed every day. Pay it forward.” He made friends at every opportunity. For Paul, there were no strangers, only friends he hadn’t met. He lived to make each and every person happy. A family song “Shut Up-a Your Face” he changed to “Cheer Up-a Your Face,” bringing a smile to even crying babies in grocery stores. Noelani (Paul and Sandy’s Solomon Island Eclectus) was his feathered, beautiful girl from heaven. They cuddled and played often. Paul was a member of the Church of Jesus Christ of Latter-day Saints. He shared his faith and his love for Jesus Christ in word and deed, each day striving to make his life and the world a little better. Paul’s father Palmar was his hero, and his dad was very proud of his Number One Son. Paul’s children feel the same for him. They say they got all of their creativity, random moments of laughter, and “It Just Doesn’t Matter” attitude from their ever-positive superhero. He proclaimed that everything would be okay, because his blood type was “B Positive.” Even in the days before his departure, Paul laughed as he quoted lines from Charlie Chan and Steve Martin movies, expressed his love for his family and friends, and shared tender moments with his grandchildren. Paul is survived by his wife, Sandy Thurgood Turnblom, his children Lisa Brook Cowley (David) and granddaughter Lauren; Christopher Paul, grandson Paul and granddaughter Neena; Crystal Ann, and grandson Prior and granddaughter Megan (Mark) and great-grandchildren Claire, Noah, and Olivia; Brady John (Alcyone), and grandchildren Ryleigh and Daxton; Amber Lynn, and grandchildren Eclipse, Lynx, Spirit (deceased) and Skyler; and Daddy’s best buddy Noelani, his siblings Karen Ratta, Steven Turnblom (Marlene), Dominique Storni, Diane Peterson (Brent), Daniel Turnblom (Joy), Cheryl Bartholomew (Alan), and Laurie Turnblom. The family expresses their sincere appreciation to Dr. Jason Stinnett, his friend and infusion Nurse Lisa, the staff at Utah Cancer Specialists for their dedicated service and friendship, the staff at Layton Hospital IHC and LDS Hospital Stem Cell for skilled care, and their neighbors, friends, and family for their love and support. Paul’s children would like to thank their “wicked cool” stepmom for the attentive, gentle loving care she so endlessly gave to their dad. A private family viewing will be held on Saturday, March 21, 2020, 10:00-10:45 a.m. at Premier Funeral Services in Roy, Utah. Immediately following the viewing a graveside service will be held at the Washington Heights Cemetery. Please share your memories and messages with the family via the mortuary website www.premierfuneral.com.

The family of Paul David Turnblom created this Life Tributes page to make it easy to share your memories.