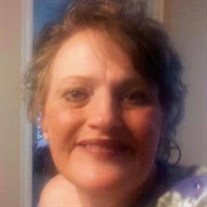 Paula Jean Byrne Wardell, 59, passed away peacefully Monday, March 14, 2022 after an extended illness. She was born February 1, 1963 in Ogden, Utah. She was the oldest of 5 children. She attended Ogden City Schools, graduating from Ben Lomond High School in 1981. She also studied cosmetology at Weber State College. She married Richard Wardell, March 25, 1983, and she was the love of his life. Together, they had two children Austin and Tyler. He faithfully attended to her every whim throughout their life together. Paula had a generous heart, and was always willing to help anyone whenever there was a need. She was also known as a good cook and was happy to share her creations. She enjoyed gardening and canning. She liked to tie quilts and would often do so with her mother, sisters, and aunts. She was both a stubborn and determined individual and a very hard worker. She is preceded in death by her mother, Dorothy Simpson; her brother, Daniel Marchant; and her grandparents, Albert and Dorothy Marchant. She is survived by her husband Richard Wardell; sons Austin Wardell of Clearfield, and Tyler Wardell of Ogden; sisters Shauna (Tom) Birt of Morgan, Linda (Brendon) Gallego of Clinton, and brother Mike (Tammi) Byrne of Seneca, Missouri. The family would like to express their gratitude to the many kind and caring professionals at The Terrace at Mt. Ogden long-term care facility, and for the remarkable hospice care she received from the nurses of Atlas Hospice. The family would also like to extend their appreciation to Joyce Howell, Paula’s aunt, who spent countless hours caring for Paula. A graveside memorial service will be held Saturday, April 2, 2022 at 4:30 p.m. at Myers Evergreen Memorial Park, 100 N Monroe Blvd, Ogden, Utah.

Paula Jean Byrne Wardell, 59, passed away peacefully Monday, March 14, 2022 after an extended illness. She was born February 1, 1963 in Ogden, Utah. She was the oldest of 5 children. She attended Ogden City Schools, graduating from Ben Lomond... View Obituary & Service Information

The family of Paula Jean Byrne Wardell created this Life Tributes page to make it easy to share your memories.