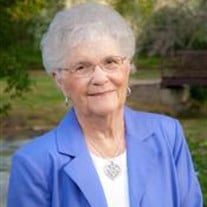 Our beloved mother and grandmother, Pauline Bailey Rasmussen Hafen, 92, left the loving embrace of her family on April 18, 2013. Pauline was the third child and oldest daughter born to Russel Bailey and Ethel Story Bailey in Moroni, Sanpete County, Utah on September 20, 1920. She preceded her brother Paul by one hour, and from that time forward Paul, in addition to his mother, had an angel-like companion looking after his needs. She learned at a young age the importance of honest work and the principle of being dependable in all that she was asked to do. She was born with an inherent love for and a belief in her Savior, Jesus Christ. Her life was centered around serving her family and her Master. She attended schools in Moroni, graduating from Moroni High School. At the beginning of WWII she met Mont Rasmussen and they corresponded while he served his country, and she represented her Church fulfilling a mission call to the Southern States Mission. Upon her release and his discharge they were married in the Manti Temple of the Church of Jesus Christ of Latter-day Saints on December 11, 1945. They spent most of their married life in Provo until Mont’s passing in 1988. They were blessed with six children, five of whom survive Pauline. In 1990 Pauline married Rex Hafen. They served a mission for the LDS church in the Tallahassee Florida Mission. Rex passed away in 2000. Pauline was a gifted cook, always willing to provide a meal to whoever would appear at the door, whether friends of her children or neighbors or relatives passing through town. She was known for her hand-dipped chocolates, and her love of quilting. Her children and grand children and friends are the beneficiaries of these two wonderful talents. She served her local LDS wards in numerous capacities of activity. She was a ward Relief Society president on two occasions. She served in the Provo Temple as an ordinance worker, and in her early-eighties she served as an instructor to the Young Women in her ward. Pauline worked for over twenty years as the school lunch manager for the Maeser School. She loved working with all of her ladies and the children at that historic school. Pauline is survived by her children, Stephen Rasmussen (Susan), Linda Smith (Bard), Russel Rasmussen (Tammy), Janet Larson, (Brent), Karl Rasmussen, (Ronda), and Rex’s son Paul Hafen (Gwen) and their six children. She is preceded in death by her infant daughter, Barbara, husband, Glen Mont Rasmussen, second husband, Rex Hafen, and grandson, Scott Rasmussen. She had the gift to make her 20 grand children each feel as though they were her favorite. Her twenty-seven great grand children were and are the jewels of her life. Funeral services will be held at 11 A.M. on Saturday, April 27 in the LDS Chapel, 1745 South State Street, Provo, Utah. Family and friends may call Friday April 26, 2013 from 6 – 8 p.m. at the same location and Saturday from 9:30 - 10:45 a.m. prior to the service. Interment will take place at the Mount Pleasant City Cemetery following the funeral.

The family of Pauline Rasmussen Hafen created this Life Tributes page to make it easy to share your memories.