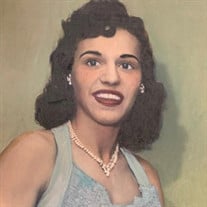 Pauline Francis Lemaitre 1932-2021 Pauline Francis Lemaitre (nee Carrubba) of Salt Lake City, UT, formerly from Woodbury, CT, died peacefully in her sleep surrounded by her loving family. The daughter of Nicholas and Lucia Carrubba, Pauline was born in September, 1932 in Waterbury Connecticut. She was married for 59 years to George A. Lemaitre who passed in 2014. Pauline was a go-getter, sparked in part by the fact that her parents, who migrated to the United States from Italy, lost everything in the Depression. She started working at 12 years old, washing dishes at St. Mary’s Hospital in Waterbury. Her list of early jobs ranged from waitress, short-order cook, hardware department clerk, donut maker, secretary, and hairdresser. During World War II she worked at Timex, inspecting firing pins in bombs. Her career took off in newspapers where she was a compositor; later, she became an early adopter of digital technology that transformed the process of creating newspapers. All told she spent 35 years working at various newspapers including the Meriden Record (Bristol), The Republican and American (Waterbury) and the New Times (Danbury). In a testimony to her work ethic, she was most proud of the fact that she never collected unemployment compensation. In her free time, she loved to cook and bake for her family and traveled frequently. She especially loved playing cards and going to casinos. She is survived by a sister (Jane Fulvo), a daughter (Paula and her husband Bryan Iandoli) and a son (“Danny” and his fiancée Morgan Irvin.) She is predeceased by another daughter Mary Ann Lemaitre. She is also predeceased by two brothers (Paul and Frank Carrubba) and a sister (Mary Vadnais). Pauline has many grandchildren including Jennifer Watters (and her husband Marc), Rebecca Lemaitre (and her husband Tim Malieckal), Jon-Paul Dow (and his wife Michele McCarthy Dow), Kalvin Lemaitre, and Grace Lemaitre. She also has six great grand-children: Olivia Watters, Caeden Watters, Bryan Dow, Mileena McCarthy Coppinger, Travis Malieckal, and Veronika Malieckal. Remarkably she has a great, great-grandchild, Piper Coppinger. She also leaves behind many nieces and nephews, all of whom she loved dearly. Pauline was well taken care of by the tremendous staff at the Ridge Senior Living in Salt Lake City, where she was especially fond of Jemima. Pauline will be interred in Calvary Cemetery in Waterbury, Connecticut. A memorial service is planned for later this year. In lieu of flowers, Pauline hopes all of you will take the time to cook and enjoy a meal with your families with a toast to her memory and everyone’s health. Condolences may be sent to Paula Iandoli at 49 Theresa Street, Fitchburg MA 01420 or Dan Lemaitre at P.O. Box 680370, Park City, UT 84068.

The family of Pauline Francis Lemaitre created this Life Tributes page to make it easy to share your memories.