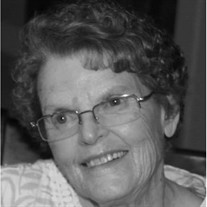 Pauline Madsen May Pauline Madsen May, 81, beloved wife, mother, grandmother, sister and friend passed away peacefully on May 4, 2017, from complications of dementia. She was born October 30, 1935 to Alfred James Madsen and Verda Pauline Carter of Lakeview, Utah. A descendant of pioneers, Pauline grew up on the shores of Utah Lake, a hard-working farmer’s daughter with a love for nature and her beloved Mt. Timpanogos. During her BYU years, Pauline met her sweetheart, James Andrew May, and they were later married on June 18, 1958 in the Salt Lake LDS Temple. They honeymooned together along the Oregon coast before settling down in Salt Lake City, Utah. They ultimately settled in the Lakeview area of Utah County, not far from where Pauline had spent her childhood. Pauline loved the land, and she could grow anything, anywhere. Her yard was glorious, her window boxes stunning, and her roses and lilacs brought her such joy. She shared her knowledge as a Master Gardener, helping others along. Other hobbies she enjoyed were canning, candy making, sewing, crocheting and she could sometimes be found at the piano, where she had the gift of playing by ear. If you’ve ever received a card or letter from her, you know that she had beautiful, flowing handwriting. Her roles as wife and the mother of seven children kept her very busy. She always served in her ward and stake, as Relief Society President, Young Women’s President, Camp Director, Scout Leader and Organist, among other callings. She supported and sustained her husband in his many callings throughout the years. She taught us, her children, the value of hard work, to finish what we started, and to always leave things better than we found them. No task was ever too difficult to tackle, and she was extremely creative in coming up with solutions for the challenges that life handed her. She is survived by seven children; three sons and four daughters; Melanie Bosselman (Chris) of Cheyenne, WY: Mark May (Yvette) of Provo, UT: Andrew May (Debbie) of Elk Ridge, UT; Holly Sonntag (Michael) of Draper, UT; Mary Osguthorpe (Russell) of Pleasant Grove, UT; Benjamin May (Erin) of Provo, UT; Jean Bradford (Andy) of Pleasant Grove, UT; and two sisters; Roxie Ann Biggs (Neil) of Alamo, NV and Kathryn Hollis (Al) of Pleasant Grove, UT. She was preceded in death by her husband, a sister, Mary Moana Madsen, and a brother, Preston Alfred Madsen. Thirty-nine grandkids and twenty great-grandchildren round out the Pauline May legacy. Funeral services will be held 11:00 am, Wednesday, May 17, 2017 at the Lakeview LDS Chapel, 1700 North Geneva Road, Provo, UT. A viewing will be held at the church from 7:00 to 9:00 p.m. on Tuesday, May 16, 2017 and prior to services Wednesday from 9:45 to 10:45 am. Interment following the funeral at the Provo City Cemetery. Condolences can be sent to the family at [email protected] (daughter, Melanie).

Pauline Madsen May Pauline Madsen May, 81, beloved wife, mother, grandmother, sister and friend passed away peacefully on May 4, 2017, from complications of dementia. She was born October 30, 1935 to Alfred James Madsen and Verda Pauline Carter... View Obituary & Service Information

The family of Pauline Madsen May created this Life Tributes page to make it easy to share your memories.