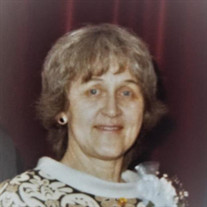 Pegge Irene Jay, 93, long-time resident of Rose Park in Salt Lake City, Utah, passed on March 23, 2020 at the University of Utah Hospital. Pegge was born on April 20, 1926 in Harvey, Illinois to Herbert M. and E. Irene Lundmark. She grew up in Illinois and later attended University of Arizona, Tucson. She married her beloved husband Clement Jay in spring of 1953, and in 1960, they moved with their five children to Utah. In addition to nurturing her family, Pegge pursued the arts – ballet, music (piano), drawing, and painting. She was a free spirit, bringing laughter and sunshine to others with songs and poems, sometimes at the accompaniment of her ukulele. She sang in the choir while Clement served as an usher during services at the First Presbyterian Church of Salt Lake City. She was also a member of Sweet Adelines. Pegge spent many years volunteering at the YMCA teaching swimming, lifeguarding, and managing pools. She was fond of all living things and she rescued, adopted, and cared for many types of animals. Her kindness and love for animals inspired the same in her children and those around her. Pegge was preceded in death exactly 12 years earlier by her husband Clement. She is survived by her brother Stephen Lundmark of Wayne, PA, and her children Bambi Lyn Jay Hayden, Megge Jay Kisselburg, Roderick Jay, Chadwick Jay, and Krista Jay VanAntwerp. Arrangements have been entrusted to Premier Funeral Services, Salt Lake City, but no services are planned at this time. In a celebration to Pegge’s life, donations may be made to the Humane Society of Utah or Best Friends Animal Society.

The family of Pegge Irene Jay created this Life Tributes page to make it easy to share your memories.