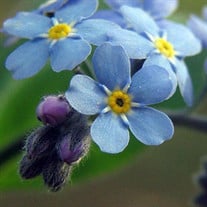 Peggie Louise Collins peacefully went home to Jesus on September 28, 2021, at the age of 94 in Heber City, Utah. Born in Los Angeles, California on June 17, 1927, to the late Rolland Lewis Varney and Rose Beatrice Buchner. Peggie was an interior designer, desiring “to help people create their own place of beauty and harmony”. She co-authored two books with Shirley Wright Collins, Putting it All Together, a Consumer’s Guide to Home Furnishings and Beyond Interior Design. Her books were used as textbooks at several Southern California colleges and universities where she was also a frequent lecturer. A copy of her first book was presented to the White House and received a thank you note from the special assistant to the president for consumer affairs, Esther Peterson, in 1977. Peggie was also an accomplished painter. She wrote, “Painting for me, is catching single moments in time. Bits and pieces of beauty. Within our busy, noisy and stressful lives God sprinkles these bits and pieces—if we would see.” She is survived by her daughter-in-law, Christi Collins of Huston, Texas; her nephew, Rick Collins of Friday Harbor, WA; her nieces Janelle Collins Teasdale of Friday Harbor, WA and Lorilyn Collins Teasdale (Kenneth) of Temecula, CA; Her great nephews Andrew, Elliot, and Wesley Teasdale; and her great niece Caitlyn Teasdale. She is also survived by her stepsister, Dianna Bodine White (Reuel Jr.) of El Cajon, CA; Her nieces Judi White Hinkle (James) of Shippensburg, PA and Sheri White Naumann (Paul) of El Cajon, CA; her great nephews John Blevins (Beth), Jeremy Blevins (Laurie), Travis Hinkle, Thomas Hinkle, and Kenneth Naumann (Janet). Peggie was preceded in death by her beloved son, Edward David Collins; her parents, her stepmother, Dorothy (Rieker) Varney and her two precious cats, Angel and Christopher. Her ashes, along with the ashes of her cats, were scattered at her request in a gorgeous meadow near Heber City in the Wasatch Mountains of Utah where she enjoyed the beauty of the ever-changing seasons.

Peggie Louise Collins peacefully went home to Jesus on September 28, 2021, at the age of 94 in Heber City, Utah. Born in Los Angeles, California on June 17, 1927, to the late Rolland Lewis Varney and Rose Beatrice Buchner. Peggie was an interior... View Obituary & Service Information

The family of Peggy Varney Collins created this Life Tributes page to make it easy to share your memories.