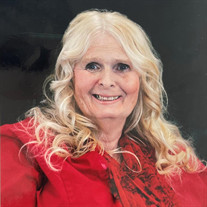 Penny Yvonne Everley Penny passed away March 18, 2022, after courageously battling Multiple Sclerosis for most of her adult life. Penny was born July 26, 1956, in Cumberland, MD to Frank and Catherine Carner. As the only girl with four brothers, Penny learned how to be tough which gave her strength and determination that far surpassed most. The family later moved to Florida where she spent the majority of her younger years and found her love for sunshine and the beach. She married Joseph Heinbach and they moved to Utah. Penny and Joe had two sons, Joseph Heinbach Jr., and Brent Heinbach, who were Penny’s greatest source of pride. She and Joe later divorced. Penny then met and married Mike Everley. They spent several years together, but later divorced. For most of her career Penny worked in the restaurant industry, owning and waitressing at many establishments. She especially enjoyed owning Syracuse Café where she made many friends and memories that she often reminisced about. Penny’s greatest loves were her grandkids, cooking for family, shopping, getting glammed up, and visiting the beach. Even while in hospice care Penny insisted on having her hair and makeup done, always wanting to look her best no matter what she may be facing. Penny is survived by her two sons, Joseph, and Brent (Shaunna - her daughter-in-law she loved dearly). Five grandchildren: Brenden, Joee (Austin), Paysen, Jaden, Jaxten. One Greatgrandchild: Theo. Two brothers Tim (Julie) Carner and Shelton Carner, many nieces and nephews, and her beloved best friend, Donna Gutierrez. Penny is preceded in death by both her parents, brothers Rick Carner and Larry Mcintosh, and niece Michelle Carner. The family extends a sincere thank you to Stonehenge of Ogden for the wonderful care they provided Penny, and the many friendships she gained while there. They would also like to thank Applegate Hospice for their care of Penny in her final days. In of lieu of flowers, the family suggests sending memorial contributions to the National MS Society.

Penny Yvonne Everley Penny passed away March 18, 2022, after courageously battling Multiple Sclerosis for most of her adult life. Penny was born July 26, 1956, in Cumberland, MD to Frank and Catherine Carner. As the only girl with four brothers,... View Obituary & Service Information

The family of Penny Yvonne Everley created this Life Tributes page to make it easy to share your memories.