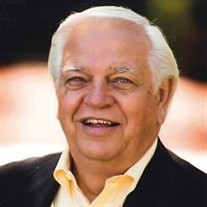 "Pops" Peter Morgan Nelson passed on December 24, 2017 while getting his back tickled by his sweetheart of 57 years, LaRae Nelson. His death was caused by complications with congestive heart failure. Peter was born on April 27, 1936 in Logan, UT to Joy and Andrew Nelson. Childhood was anything but boring for Peter. During the spring and summer he would help his mother tend to the fruit and vegetables in their garden, and in the winter his main focus was earning $1.75 for his lift ticket to feed his skiing addiction. In the winter of 1955 while attending Utah State University he spotted a good looking blonde in his economics class. That was the beginning of a protracted courtship that lasted for five years. In the summer of 1960 LaRae and Peter were married and had three children Angie, Stephanie, and Peter Michael. After graduating college Peter became an entrepreneur and moved his family to Salt Lake City where they shared much happiness. He loved flying private planes, playing basketball, and cheering on the Dallas Cowboys. Peter left an everlasting impression on everyone he knew. His wisdom and love will be greatly missed. He is survived by his LaRae Nelson, Angie & Vince Martinez, Stephanie & John Pernyak, Pete & Melanie Nelson, his brother; James & Sharon Nelson, his gems; Ashley & Brysson Truman, Vinnie, April, Riley, Michael, Brianna, Mitch, Emily, Parker, and Oakley. If you knew Peter you knew he loved you. He leaves behind many friends and family who he loved dearly. Special thanks to Dr. Miller and his staff for extending Peter's life and giving him the hope he needed. Funeral services, Saturday, December 30, 12pm, at 1160 E Vine St. Murray, UT. Viewings: Friday, December 29, 6-8pm, and Saturday, December 30, 10:30-11:45 am, prior to services.

"Pops" Peter Morgan Nelson passed on December 24, 2017 while getting his back tickled by his sweetheart of 57 years, LaRae Nelson. His death was caused by complications with congestive heart failure. Peter was born on April 27, 1936 in Logan,... View Obituary & Service Information

The family of Peter M. Nelson created this Life Tributes page to make it easy to share your memories.