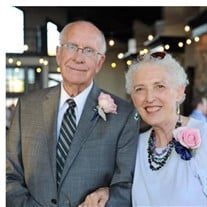 Peter Kay Wheadon was born February 28 1937 in Salt Lake City, Utah and died on July 17, 2019. He is survived by his wife Sydney H (Dyal) Wheadon and six children: Robert Wheadon, Bruce Wheadon (Jennie), Bret Wheadon, Amy Sessions (Curtis) Aaron Wheadon (Julee), Keith Wheadon (Janelle). He and his wife love 26 grandchildren and 2 1/2 great grandchildren. They were married and sealed in the Los Angeles Temple and been married 58 years. He graduated from BYU with a BS and then got an MBA from Santa Clara University. Pete worked as the Purchasing Manager for the Davis County School District and retired a little early and worked for the 2002 Winter Olympics in Salt Lake City doing contracts for vendors. He enjoyed music and loved to sing uplifting and fun songs his whole life from Gilbert and Sullivan, opera chorus, Hymns, choir. He also played the trumpet from high school in the band to just for his enjoyment. His served in several Church callings and served several missions: Western States when a young missionary, Australia North as a senior missionary with his wife in the office taking care of flats, cars, bikes, and bills. The couple also served as senior missionaries in the Family History Library in Salt Lake City, and Pete worked as a specialist for Church Employment. He was a laundry worker in the Bountiful Temple and an ordinance worker for 10 years. He also did a lot of indexing records and was given a certificate for being in the top 1% in the worldwide church. Pete received a lot of joy by serving others: strangers, neighbors, friends, and family with whatever was needed. He also enjoyed making wooden trucks, trains, planes, helicopters, cars, doll cradles for his grandchildren. He will be sorely missed for his calm, sweet temperament, love of his family and his Savior, brains to fix anything including new engines for cars, plumbing, electricity, sprinklers, etc. Funeral Services will be held at 10:30 a.m. on Saturday, July 27, 2019 at the Centerville 2nd Ward Building located at 1475 North 50 East, Centerville, Utah. Viewing will be one hour prior to the services. Interment will follow the services at 1:30 p.m. at the South Jordan City Cemetery.

The family of Peter Kay Wheadon created this Life Tributes page to make it easy to share your memories.