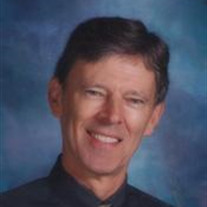 Born October 13, 1945 in Tempe, AZ; died April 30, 2012 in Cottonwood Heights, UT of widespread metastatic adenocarcinoma. He is survived by his wife Carol; four children, Ryan, Amy, Barr (Megan), and Camie (Drew) Conrad; grandkids, Annabelle, Xander, and Beck; siblings, Lani (Bill) Reynolds, Angie, and Jeff (Linnette); and parents, Phil and Kathleen. Brent used his Danish heritage to justify always tasting a little of everything, whether is was dessert or a variety of life experiences. He loved the outdoors and enjoyed annual backpacking or canoe trips with his sons, mountain biking in Moab, off-road motorcycling, water skiing at Lake Powell, and scuba diving. In later years he relished trading the old (tennis, snow skiing) for the new (spending time with grandchildren, hiking, or just playing at the park). Brent graduated from San Diego State (1968) and although he was accepted to the University of California at San Francisco, he elected to pursue his medical degree at the Univ. of Utah where he met his “better half” Carol before graduating in 1972. He specialized in Psychiatry and Child Psychiatry (1976). He lectured and supervised decades of trainees in various fields of social work, psychology, and child psychiatry (with emphasis on his research interest of autism). He was Adjunct Professor with the Dept. of Psychiatry, Univ. of Utah. He was published in a variety of major psychiatry and genetic journals, having been on several research teams (UCLA, Stanford, Univ. of Utah). He received a number of community and teaching awards for his work in child psychiatry. An advocate for the impact of internal locus of control, he felt the best way to improve children’s self-esteem was to teach them meaningful skills that they could see made a difference. A believer, Brent served an LDS mission to France and Switzerland at age 19 and served in many other callings during his life, including organist, gospel doctrine teacher, and bishop. If asked, he would quietly say, “I got to know Christ the best in the Congo.” He served as a mission president from 2001-2003 with his “amazing” wife in Kinshasa, a place that seemed to have innumerable and unsolvable problems. It was only his devotion “to Him” that overcame his unease when visiting some of the most dangerous cities of the world (Bangui, Central African Republic; Brazzaville, Republic of Congo). He was still serving as Stake President of the Butler West Stake when the cancer outflanked him. The cancer, however, never outflanked his humor and positive outlook (although on occasion he was driven to “gallows humor”). Brent loved a good joke and told many over the years. He also loved a good bear story around a campfire and laying out the practical dilemmas of what to do when under attack. He loved a good discussion on science and religion and attempted to reconcile apparent conflicts. His best personal therapy was playing the piano (occasionally finding a “pick up” recital) and he relished playing duets with his children. He saw no substitute for “loving kindness” and, like many, was glad he mellowed over the years and gained a clearer perspective about what is most important in life. The family wishes to thank the staff and caretakers at CNS Hospice Care and the Salt Lake Clinic of Oncology for all the wonderful care and services provided. Funeral services will be 11:00 am, Saturday, May 12, 2012 at the Butler West Stake Center, 1845 East 7200 South, Salt Lake City, Utah were a viewing will be held Friday from 6 to 8 pm and prior to services on Saturday from 9:45 to 10:45 am. In lieu of flowers or gifts, please make contributions to the P. Brent Petersen Scholarship Fund for the Children with Autism, Valley Foundation, 4660 So. Highland Drive, Suite 300, SLC, Ut. 84124. or the P. Brent or Carol Petersen Congo fund at Zion’s Bank, Brighton Office, 2029 E. 7000 So, SLC, UT, 84121 In lieu of flowers or gifts, the family requests contributions to the P. Brent Petersen Scholarship Fund for the Children with Autism, Valley Foundation, 4660 So. Highland Drive, Suite 300, SLC, UT, 84124, or the P. .Brent or Carol J. Petersen Congo fund at Zion’s Bank, Brighton Office, 2029 E. 7000 So., SLC, UT, 84121

The family of Phil Brent Petersen created this Life Tributes page to make it easy to share your memories.