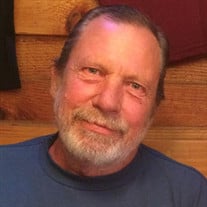 Phillip Charles Barnes, born December 17th, 1958 in Salt Lake City, Utah to Jerry and Elma Barnes. He grew up in Granger where he attended Granger High School. Then later married Joyce in Las Vegas, NV on May 12th, 1990. Fresh out of high school he joined the Army. He was stationed in Germany as a Diesel Mechanic with an honorary discharge on July 1st, 1979. He received multiple achievements such as: sharp shooter, M-16 rifle and hand grenade as well as his mechanics badge. Phil was one of the greatest Diesel Mechanics, working all day and spending his nights explaining how to fix them over the phone. He took pride in his work and eventually opened up his own business, which he was super proud of. In his spare time, Phil loved to race his car at the Bonneville Raceway. "Go #33"! Camping, fishing, and golf were some of his favorites. He also loved baseball where he made it into the Little League World Series. Most importantly he kept his mom's legend alive with bowling. Phil was a friend to everyone and always had an open door for his loved ones. He was a mentor and loved to share his knowledge. He had a lot of wisdom combined with a whole lot of humor. You know when he was about to preach, when he started with one of his two favorite sayings.... "Let me take you back..." and "Do you remember..." He was always proud of where he has been and his accomplishments. But when all was said and done, there was always one more question to ask... "Do you want to ____, Fight or Wrestle?" He is survived by his wife Joyce Barnes, their children: Robert (Angie) Barnes, Joshua (Erica) Barnes, Tiffany (Stephen) Harrison, and Tyler (Chelsie) Barnes; his two brothers and their families; his two granddaughters and three grandsons. He was preceded in death by his brother Michael Barnes and parents. A viewing for family and friends will be held on Wednesday, September 2nd, 2020 at Premier Funeral Services from 6-8:00 pm, 67 East 8000 South, Murray, UT 84047. Graveside services will be held privately at Utah Veterans Memorial Park (Camp Williams) with full military honors.

The family of Phillip Charles Barnes created this Life Tributes page to make it easy to share your memories.