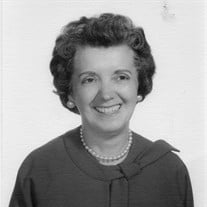 Phyllis Clarke Clements June 22, 1913 - August 17, 2019 Phyllis Clarke Clements passed away on August 17, 2019 in her home in Sandy, Utah at the age of 106. Phyllis was born June 22, 1913 in Clarkston, Utah to John Roland Clarke and Nora Lloyd Redford. She grew up in a happy home and was the second oldest of seven children. She spent her early years in the Rexburg, Idaho area and graduated from Madison High School in 1931. She met her eternal companion Denton Clements in high school where they were both student officers. They married December 5, 1933 in the Salt Lake City temple. They spent many years in Rexburg, Idaho where they were blessed with five children: Diane (Var, deceased) Winn, Marilyn (Harold) Wilkinson, Linda (Burton) Olsen, Boyd (Cynthia) Clements, and Susan (Matt, deceased) Smith. The family was blessed to have Patricia Brown (Silva) join the family for several years. In 1953, the family moved to Roseville, California. They became a strength to the Church of Jesus Christ of Latter-day Saints there where she served multiple times as Relief Society President, a Relief Society teacher, early morning seminary teacher, in Young Women, and as a stake missionary. She and her husband served a mission at the Sacramento Deseret Industries, where they helped counsel and train. In 2001, following the death of Denton, she moved to Sandy, Utah where she has since resided. Phyllis was blessed with many talents. In her youth, she often gave readings. Her family was musical, and she was blessed to play the piano by ear, and could hear parts which she taught her children. She won a prize for a short story writing contest, and wrote poetry. She was a gifted seamstress, and often copied expensive designer dresses for her girls. She had an artistic eye which was reflected in the way she decorated her home, planned the landscaping in her yard, and also applied to canvas. Her paintings grace the homes of many throughout the country. Her most precious talent was her gift of mothering. Her example as a true companion to her husband, and her unfailing support of him in his church callings and employment have been a credit to her. She could have been successful in any career, but focused her energies, insight and wisdom into developing successful and happy children. Phyllis had an unfaltering testimony of her Savior, Jesus Christ. Most especially in her later years, this personal knowledge of her Savior strengthened and sustained her. She is survived by her brother J. Richard (Barbara) Clarke and her 5 children, 28 grandchildren, 107 great-grandchildren and 49 great-great-grandchildren. She is preceded in death by her husband Denton; her siblings LuNone (Ole) Heilesen, Devar (Martha) Clarke, Lyle (Marion) Brewer, Lorene Clarke, and Maxine (Hugh) Hillman; her sons in law Var (Diane) and Matt (Susan); and two great-grandchildren Simon Olsen and Jenna Winn. Memorial services will be held on Saturday, August 24th at 11:00 AM at the Alta Heights Ward Chapel, 1475 East 8600 South, Sandy, UT. A viewing will be held Friday, August 23rd from 6:00-8:00 PM, and prior to the funeral at 9:30 am. Condolences may be expressed at www.premierfuneral.com.

The family of Phyllis Clarke Clements created this Life Tributes page to make it easy to share your memories.