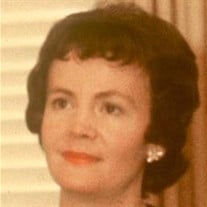 Phyllis McKenzie Vogeler 1935 - 2016 Phyllis McKenzie Vogeler passed away September 24, 2016 in Salt Lake City. She was born August 1, 1935 in Ely, Nevada, the daughter of Vance and Sara (Gardner) McKenzie. She was preceded in death by her parents, her brother Ken, and her son Gus. Phyllis grew up in Lund, Nevada on the family dairy farm. She survived a serious bout with rheumatic fever, and learned at a young age to sew, to ride a horse, and to cook for a hay crew. She loved school, and upon graduating from Brigham Young University Phyllis was hired as a Home Economics teacher at Elko High School. In Elko she met, and soon married, Gus Vogeler (now deceased). They raised three sons, Gus, Roger, and Kyle, in Elko. They later divorced. Much of Phyllis’s life was spent teaching. Although she left her position at EHS to raise a family, she taught classes in sewing and nutrition part-time at Northern Nevada Community College. After the boys were grown, she served a full-time LDS mission in British Columbia. Later, around the time her grandchildren began to appear, she taught kindergarten in Spring Creek. Along the way she owned and operated a fabric store for several years in Elko where she taught classes in quilting and related arts. Phyllis is survived by her sister Geraldine Oxborrow Roper, brothers Rod and Donald McKenzie, sons Roger and Kyle Vogeler, grandchildren Michael, Kayla (Hobson), Brittni (Hyzer) and Alyx, and great-granddaughters Celes and Brooklyn Hyzer. Special thanks go to the caring staff at Silverado Aspen Care and Silverado Hospice. A funeral service will be held 2:00 p.m., Saturday, October 8, 2016 at 1495 E 4705S., Salt Lake City, Utah. Burial will take place at 2:00 on Sunday, October 9 at the town cemetery in Lund, Nevada.

The family of Phyllis McKenzie Vogeler created this Life Tributes page to make it easy to share your memories.