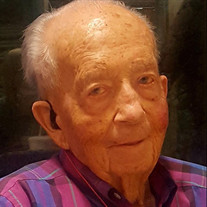 Ralph Hill Ashby passed away peacefully at his home in Farr West, Utah on Friday, November 16, 2018 at the age of 93. Whenever he was asked his age, he was fond of saying “18 with 75 years of experience”. Likewise, when asked his date of birth it was always “19 hundred and two-bits”. He took pleasure in the reaction he received, especially from the younger generation. Ralph was out-going and friendly to all, especially the youth. He had many stories of his life experiences that he loved to share. Ralph was born in the farming community of Maeser, Utah (near Vernal) on November 14, 1925. He is the eldest son of Alma Curtis Ashby and Evelyn Eliza Clark. As a young boy, he enjoyed swimming in the canal, building tree houses in the old cottonwood and filling his pockets with apples from the orchard. At the young age of 17, he lost his father, leaving him to assume many of the additional responsibilities on the farm and with the family. Shortly thereafter, Ralph enlisted in the Marine Corps and served his country in the South Pacific during WWII. He was an amphibious tractor crewman and rifleman in the 1st Marine Division. He participated in action on Peleliu Island, Palau Island Groups, Okinawa and the Ryukyu Islands. He referred to his wartime experience as an "adventure". Under the GI bill, Ralph learned to fly small aircraft and loved to reminisce about his flying days, including asking girls out on dates by dropping parachutes in their yards and inadvertently scaring cows so badly that they wouldn’t give milk for days. He put off his love of flying after marriage and longed to be a pilot again even up to his passing. He worked numerous interesting jobs, most notably in the oil industry in western Colorado; Boeing Company in Seattle, Washington; and the Soil Conservation Service, surveying many of the farms in the Farr West and Plain City area. Eventually, his career path led him to Hill Air Force Base where, amongst other projects, he served on an aircraft accident investigation team member for the F-101, F-4 and F-16 fighter jets. At the time of his retirement, he was in program management as the liaison for the U.S. Air Force, with Denmark, Belgium and Sweden. Ralph married Linda Lee in the Salt Lake Utah Temple on September 3, 1957. They made their first home in Vale, Oregon, before moving to Ogden, Utah to raise their family. He always maintained an immaculate and beautiful yard, believing the effort made him feel stronger even up to a few days prior to his passing. He enjoyed the compliments, but more importantly, it was about making others feel good when passing by. Ralph was an active member of the Church of Jesus Christ of Latter-day Saints. He served in many callings including Bishop of the Ogden 66th Ward, High Counselor in the Ben Lomond South Stake, and most recently the Librarian in the Farr West 6th Ward. He was a faithful home teacher and loved visiting with those he served. Ralph and Linda are the parents of seven children: Rick (Susan) Ashby, Karlyn (Garth) Braithwaite, Kaylene (Tom) Checketts, Ralyn (Dave) VanBeekum, Karleeta (Kirk) Jardine, Daryn (Deborah) Ashby and Karla (Mitch) Simpson. They are the proud grandparents of 34 grandchildren and 29 great-grandchildren with two on the way. Ralph was preceded in death by his parents; two brothers, Keith and Don Ashby; and sister Norma Marshall. Surviving are his wife Linda, his children and their spouses, all of his grandchildren; sister Barbara Bingham; sister-in-law Norita Ashby, many nieces and nephews, and family members Gene Gaddo and Larry Sights. Those who wish to visit with the family may do so at the Farr West North building, 2565 W. 3300 N. from 6:00 p.m. to 8:00 p.m. on Friday, November 23, 2018 and on Saturday, November 24, 2018 from 9:30 a.m. to 10:45 a.m. Funeral services will be held at 11:00 a.m. with Bishop Josh Jaques of the Farr West 6th ward presiding. Interment will follow at the West Haven Cemetery at 1500 S. 2350 W. The family wishes to thank the many friends and neighbors, ward members, and even many strangers, for the many years of kindness and caring shown to their family.

The family of Ralph Hill Ashby created this Life Tributes page to make it easy to share your memories.

Ralph Hill Ashby passed away peacefully at his home in Farr West,...