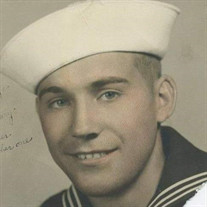 Ralph James passed peacefully at home on Thursday morning, surrounded by the love and comfort of his family. He was born April 2, 1920 to Joseph Henry James and Rhoda Mae Nelson in Tucson, Arizona. Ralph lived every single day of his 97 years to the absolute fullest, never wasting a minute - or a cent, if he could help it. Ralph can best be remembered for his wit and sense of humor. He always had a sparkle in his eye, and a mischievous grin that would be the prelude to a joke or a story that almost always began with “I’ll never forget the time …” Others may remember him covered with dirt, oil or grease, always in the midst of his latest project. He tackled each one with the same fervor and passion, and his projects filled most of his days for the large majority of his 97 years. Ralph was the kind of man who would remain married to his wife Dorothy, for over 70 years, until her death in May 2010. During that span, Ralph purposely lost every disagreement and patiently agreed with his wife on nearly every point until she had said her piece. Like his late wife, Dorothy, Ralph never met a stranger in his life, and he was quick to open up his home, his wallet, or give generously of his time to anyone in need. In addition to raising their 3 children, Janice, Stephen and Kathy, Ralph and Dorothy adopted their niece, Dolly and their nephew Danny as their own. While the remaining nieces and nephews were not legally adopted, they were lovingly cared for and welcomed into Ralph and Dorothy's home. Ralph was the kind of father who wouldn't blink to drive cross country to see his daughter perform in a ballet in New York City, or anywhere in the country to watch a softball game. Ralph was the kind of man who would happily drive his granddaughters around all day on a fool’s errand, knowing all the while that what they were looking for could not be found. He never hesitated to lend a hand, often spending days or weeks at a time to help a neighbor, friend or even a stranger with any need. Ralph was a true patriot in every sense of the word, having fought in World War II as a Chief Petty officer in the United States Navy. He was involved in offshore naval support for American troops in the Korean War and voluntarily put himself in harm's way as a consultant for the United States military in Vietnam, Ralph was a man of great conviction and passion for many things throughout his life; One of which was BYU football, much to the chagrin of his Utah-Utes loving grandchildren. He was known to risk the wrath of his wife to run off to a BYU bowl game, leaving only one of his infamous notes to account for his absence. "D, Gone to Holiday Bowl. Back Monday. R." True to his nature, Ralph worried and planned over the security and well-being of his loved ones to his days, and never complained about any pain or discomfort. Ralph was a man who required little but gave all. His legacy will be one of patience, selflessness, immense generosity, sacrifice and love of family. Through those attributes and values, he touched the lives of numerous family members, friends, neighbors and probably countless strangers. While he may no longer be with us physically, his life and lessons will remain, having touched us all. Through that legacy, he will remain with us always and never be forgotten. Ralph was preceded in death by his parents, siblings and late wife, Dorothy. He is survived by his 5 children, 11 grandchildren and several great-grandchildren. Funeral services will be at 1:00 p.m. on Monday, July 31, 2017 in the chapel located at the Utah Veterans Memorial Park, 17111 S. Camp Williams Road, Bluffdale, UT. Viewing will be one hour prior to the services. Burial with military honors will follow.

Ralph James passed peacefully at home on Thursday morning, surrounded by the love and comfort of his family. He was born April 2, 1920 to Joseph Henry James and Rhoda Mae Nelson in Tucson, Arizona. Ralph lived every single day of his 97 years... View Obituary & Service Information

The family of Ralph James created this Life Tributes page to make it easy to share your memories.