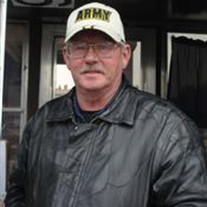 Ralph Kent Knutson, 59, formerly of eastern Idaho, now of Salt Lake City, Utah, died Wednesday, June 15, 2011 of pancreatic cancer at the home of his best friend Bonnie Anderson. He was born December 8, 1951 in St. Anthony, Idaho, to Alfred K. Knutson and Phyllis Ripplinger Knutson. He attended elementary school and middle school in Dubois and Hamer, Idaho, Jr. High School in Rexburg, Idaho and graduated from Rexburg High School. He served in the US National Guard and was stationed at Ft. Leonard Wood, MO for basic training; during his training he received an Outstanding Trainee award. He Married Judith Susan Jacobs Bell on January 27, 1973 in Las Vegas, Nevada, they later divorced. Ralph served in the U.S. Army and was stationed at Ft. Ord, CA and then at Ft. Leonard Wood, MO for basic training. He completed basic training and arrived home the day before his daughter Kira was born April 20, 1975. He was then stationed at Ft. Lewis, WA as a Combat Engineer. In 1977 he received a knee injury and was honorably discharged. He continued his education at Idaho State University, majoring in Geology; he then worked in the oil fields in Wyoming, and worked other various jobs. He was under the care of the Veterans Hospital and had also worked there at times. At the time of his death, Ralph was on extended leave from his job with Wasatch Property Management’s City Centre building and under the care of Community Nursing Services Hospice. He is survived by his parents, Alfred and Phyllis Knutson, of Rigby, his daughter, Kira Knutson, of Aurora, CO, brothers, Albert (Sharon) Knutson, of Queen Valley, AZ, Neil (Betsy) Knutson, of Twin Falls, ID, Roger (Brenda) Knutson, of Madison, AL, and a sister Karleen (Fred) Orcutt, of Glendora, CA. He was preceded in death by an infant sister, Janetta. Graveside services will be held at 11:00 a.m. Tuesday, June 21, 2011, at the Utah Veterans Memorial Park Cemetery, 17111 South Camp Williams Rd, Bluffdale, Utah.

The family of Ralph Kent Knutson created this Life Tributes page to make it easy to share your memories.