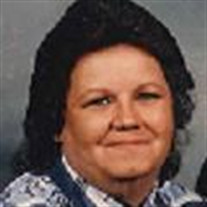 Ralynn Cullens 1962 – 2017 Our loving mother, grandmother, aunt, and friend, Raynn Cullens, passed away November 20, 2017. Ralynn was born September 20, 1962 in Ogden, Utah to Shirley and Ray Brown. She graduated from Weber High School and attended technical college where she learned to be a machinist. She married Wayne V. Cullens in 1991 in Roy, Utah. He preceded her death. Ralynn enjoyed camping, especially telling stories about around the campfire. She was a past Grand Auxiliary President for the Roy Eagles 3355. She spent a number of years working as a bartender, where she made many friends. She is survived by her son, Butch R. W. (Breezy) Cullens of Montana; most precious granddaughter, Jessie Cullens of Montana; sister, Rhonda (Arny) Olsen of Huntsville, Utah; brother, Rex Brown of Clinton, Utah; and several nieces and nephews who she had a special bond with. Preceded in death by her husband; parents; grandparents, Pete and Phyllis Schurz and Frank and Alice Brown. Graveside services will be held Monday, December 4th, 2:00 pm at Lindquist Washington Heights Memorial Park, 4500 Washington Blvd, Ogden, Utah. A viewing will be held prior from 12:30 – 1:30 pm at Premier Funeral Services, 5335 South 1950 West, Roy, Utah. In lieu of flowers, the family is taking donations to help defer funeral expenses.

The family of Ralynn Cullens created this Life Tributes page to make it easy to share your memories.