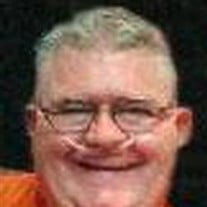 Randy Dean Matkin suddenly returned to his Heavenly Father January 27, 2015 leaving behind the pain he has suffered with for so long. He was born July 16, 1952 in Pocatello Idaho to Andrew Charles Matkin and Iris Marie Cross. He married Jeri Parker and had two beautiful daughters Amber and Erin. They divorced and he then married his eternal companion Nancy Stucki. Randy graduated from Highland High School in Pocatello Idaho where he was captain of the football team and made many lifelong friends. Randy loved airplanes. When he attended Ricks College he totaled a plane on his first solo flight and walked away unhurt. He served in the United States Air Force for 11 years as a loadmaster during the Vietnam era. He retired as a window clerk at the Clearfield Post Office, a job that let him work with people, which he loved. We are going to miss hearing his loud cheers of encouragement and opinions of the referee’s calls at his grandson Noah’s wrestling matches and football games. Randy was a generous man helping many people along the way. He never met a stranger. Randy would say to you all “stay young and stay healthy”. Randy has a strong and steady testimony of his Savior, the Atonement, and of the Plan of Salvation. He served faithfully in many different callings his favorite being Stake Mission President. Randy left behind his wife Nancy; Amber’s children Celeste, Noah, Lilly; daughter Erin (Curtis) Johnson, her daughter Samantha, his son-in-law Ben Bumanlag. He is also survived by his sister Margaret Arnold and his brother Kim (Kym) Matkin, sister-in-law Annette Matkin, brother-in-law Jim Phelps, Aunts and Uncles Harold Cross, Ruth Teeter, Eloise and Sam Wyrouck, siblings-in-law as well as many cousins and nieces and nephews who he adored. Also Mark Bottema, his brother from another mother. Preceded in death by parents, brother Marvin Jay Matkin, sister Andrea Phelps, daughter Amber Lee Matkin, granddaughter Emily (Noah’s twin), brothers Kayle, Doyle and Royce Matkin. Funeral services will be held Saturday, January 31, 2015 at 11 a.m. at the Park Chapel, 861 East 600 South, Clearfield Utah. Friends may greet the family Friday, January 30, 2015 from 6-8 p.m. and Saturday, January 31, 2015 from 9:45-10:45 a.m. also at the Park Chapel. Interment will be at Clearfield City Cemetery. The family wishes to thank all the many caregivers and doctors who have helped him these past few years.

Randy Dean Matkin suddenly returned to his Heavenly Father January 27, 2015 leaving behind the pain he has suffered with for so long. He was born July 16, 1952 in Pocatello Idaho to Andrew Charles Matkin and Iris Marie Cross. He married Jeri... View Obituary & Service Information

The family of Randy Dean Matkin created this Life Tributes page to make it easy to share your memories.