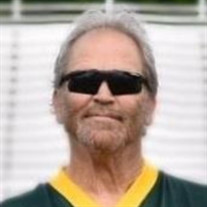 The sky was crying the morning of April 15th, when our beloved husband, father, companion, and Green Bay Packers shareholder, Randy Kevin Smith, left this life and moved to where the sun shines every day. Randy was born September 3rd, 1956 to Kenneth and Betty (Bergeron) Smith, in La Marque, Texas. He was the youngest and only son of the family. Randy graduated in 1974 from Texas City High School where he played football and caused as much ruckus as he possibly could. He was accepted to Texas A&M University, and although he never completed his studies, he remained a committed Aggie until the end. Around 1977, he made his way to Evanston, Wyoming to begin a lengthy career in the drilling industry. Through his craft, Randy made enduring friends, traveled the world and also met the love of his life, Stephanie (Fraser) Smith, of Woods Cross, Utah. Stephanie and Randy were married in Evanston on November 10, 1984. They relocated to Bountiful, Utah and shortly after had the first of three daughters. Randy gave every ounce of energy he had to his family, his career and his cohorts. He built an extended family of coworkers and loved ones all throughout the U.S. that meant the world to him. After family, friends and work, Randy had an appetite for good music and good food; he had impeccable taste for both. Randy had a love of all thing’s sports-related. He never missed a Nascar race or a football game. He was often found wading and surfing the beautiful shores of the Texas gulf coast as a younger man, and putting the greens any chance he got as an older man. Randy was also hilarious, charming and couldn’t be threatened with a good time. He always had a warm hug and a smart remark to give anyone lucky enough to be within a 10-foot radius of him. His spirit and character will leave a hole on this earth, and in our hearts, that can never be filled or replaced. Randy is survived by his loving wife of 38 years, Stephanie, his three daughters, Jenna (Zachary Riddle), Jaleen (Andrew Johnson) and Jessi (Christofer Ruiz), grandchildren Tesla and Zephyr (plus one more grandson due in August), his sister, Debra (Paul Gray), nieces Laura, Leigh, and Bobbi, nephew Brad, plus more friends than one could ever count. Randy is preceded in death by his parents, Ken and Betty Smith, mother and father-in-law, Ray and Betty Fraser, sister, Sue Boyer, nephew, Spencer Gray and those whom he loved that were also gone too soon. Please join us for a celebration of Randy’s life on Saturday, April 23rd at 5PM at the Bountiful Elks Lodge. We will share stories, drinks, a poker game and love for this amazing force of life we will never forget. “The story of life is quicker than the wink of an eye. The story of love, is hello goodbye...until we meet again” In Lieu of flowers, please make a donation to the Utah Elks Veterans Program PO Box 293 Eureka, UT 84628 [email protected]

The sky was crying the morning of April 15th, when our beloved husband, father, companion, and Green Bay Packers shareholder, Randy Kevin Smith, left this life and moved to where the sun shines every day. Randy was born September 3rd, 1956... View Obituary & Service Information

The family of Randy Kevin Smith created this Life Tributes page to make it easy to share your memories.

The sky was crying the morning of April 15th, when our beloved...