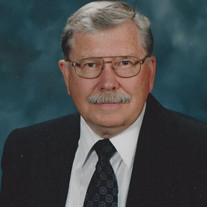 Ray Lorenzo Larsen 1934 – 2018 Ray Lorenzo Larsen, 84, passed away peacefully on December 26, 2018, after a long fight with Alzheimer’s disease. He was born November 6, 1934, in Salt Lake City, Utah to Henry Lorenzo Larsen and Blanch Louella Jensen Larsen. He was the first of five children. He was reared in Salt Lake City until twelve years of age, when his family moved to Bountiful, Utah. He lived in Bountiful until joining the United States Air Force in 1953. Ray served honorably for four years; he loved serving his country. On April 12, 1957, Ray married Maxine Hammond. They were sealed in the Salt Lake Temple on October 17, 1958. Ray was the father of six children, grandfather of seventeen grandchildren, and great-grandfather of eight great-grandchildren. He loved his family and set a righteous example for them. Ray attended Brigham Young University and received his Bachelor of Science degree in 1963, after which his career varied. Ray worked twelve years in Corrections. He was a Correctional Caseworker for the State of Utah. For the State of Alaska he was Director of a Correctional Half-way House, Probation Officer, Criminal Justice Planner, and Assistant Director of Institutions. He also taught twelve years for the Church of Jesus Christ of Latter-day Saints, at Brigham Young University and for the Church Education System. He was the Circulation Librarian at Brigham Young University for four years. Ray also enjoyed working with his hands and was an accomplished carpenter. Ray was an active and dedicated member of the Church of Jesus Christ of Latter-day Saints. He held many positions, but his deep love was teaching the Gospel Doctrine class. He and Maxine served a senior mission in El Paso, Texas teaching institute at UTEP from 2000 to 2002. They served a second senior mission in Germany rendering support to the US Military Branch in Baumholder from 2005 to 2006. Ray was a great example of a giving nature. He loved people and his compassionate and friendly nature drew people to him. He was always happiest when he was involved with teaching, counseling, serving, befriending, and socializing with others. He would never pass up a stimulating conversation. He enjoyed fishing in Alaska and in Utah ; hunting with his father; playing, coaching, and watching football; and, in his later years, visits from his family and friends. Ray is survived by his wife, Maxine; his children Lezli Rae (Bryan) Atkinson, West Haven, Utah; Michelle (Michael) Belden, Farmington, Utah; Rebecca Lyn (Kelly) Feller, Farmington, Utah; Andrew Lorenzo (Marilee) Larsen, Farmington, Utah; Stephanie Ann Smith, Farmington, Utah; and James William Larsen, Salt Lake City, Utah; seventeen grandchildren and seven great-grandchildren. He is also survived by a sister, Judy Pulsipher, Ocala, Florida; and two brothers, Ronald Lynn Larsen, St. George, Utah, and Douglas James (Renee) Larsen, Kearns, Utah. He was preceded in death by his parents, his brother, Gerald Lee Larsen, and a great grandchild, Elijah Belden. Ray’s family would like to thank the staff of Rocky Mountain Hospice for the loving care they provided for Ray and the support they rendered to his family during the last six months of his life. Funeral services will be held 11:00 am, Saturday, January 5, 2018 at The Church of Jesus Christ of Latter-day Saints Chapel, 3628 South 2700 West, West Haven, Utah. A viewing will be held prior to the funeral services from 9:00 to 10:30. Interment, Logan Cemetery, 1000 North 1200 East, Logan, Utah.

The family of Ray Lorenzo Larsen created this Life Tributes page to make it easy to share your memories.