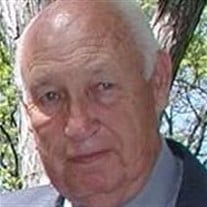 Ray Joseph Needham (91) released his earthly bonds and traveled home to join his beloved wife, Verle, on October 2, 2019. Ray was the youngest child of Jesse Gyle Needham and Emma Jane Parker and was born on January 21, 1928 in St. Louis, Oklahoma. He is now reunited with his parents along with brothers Chrystola, Jesse “Duke”, Jack, and Dale Needham. Ray’s family moved from Oklahoma to Utah when he was young. He joined the Army in 1946 and was trained as a paratrooper and was honorably discharge in 1947 as the WW II military needs winded down. He returned to Ogden following his military service and married Verle Adele Stromberg on October 10, 1952. Their marriage was later solemnized in the Salt Lake City LDS Temple. Ray was a dedicated member of the LDS church, serving in a multitude of callings. He especially enjoyed his service at the Ogden Cannery and as an LDS Church service missionary alongside his wife, in central Ogden, helping to strengthen and support ward members. As a boy Ray loved the outdoors and playing ball with neighborhood friends. Their field was a pasture and their bats were sawed off broom sticks. He was a member of the Ogden City Rec Jr. Baseball Championship team as a teenager and played on semi-pro teams in the Utah-Idaho and Northern Utah Leagues throughout the 1950’s. His other sporting passion was golf, playing and making friends at courses all over the state. One of Ray’s hallmark traits was a strong and dedicated work ethic, which he exhibited in his positions at Swift’s Meat Packing, GSL Chemicals and as Custodial Supervisor in the Ogden City School District. Ray is survived by his sister Norma; children: Bruce (Angela) Needham, Nancy (Larry) Sorensen, Kathi (John) Dilworth; grandchildren: Jared Sorensen, Brin (Joseph) LaFleur, Adam Sorensen, Megan Sorensen, Klaire Dilworth, Paxton Dilworth, Joseph Needham, Jake Needham, Andrew Needham, Thomas Needham and Caroline Needham; three great-grandchildren: Luthien, Perrin and Roe LaFleur and numerous nieces, nephews and extended family members. A celebration of his life will be held at the South Ogden LDS 5th Ward (4380 Orchard Ave, South Ogden) on Thursday, October 10, 2019 from 6:00-8:00pm. Funeral services will be the following day, October 11 at 11:00 am at the same location. Interment will be at the Ogden City Cemetery following the services. Special thanks to the staff of Mountain Ridge Assisted Living in South Ogden for their tender and dedicated care of Ray and Verle over the last 2 years.

The family of Ray Joseph Needham created this Life Tributes page to make it easy to share your memories.