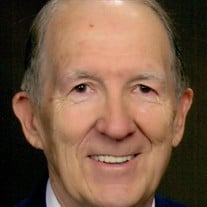 Raymond Glenn Lewin passed away peacefully, surrounded by his family, on April 22, 2022 at the assisted living facility in Holladay, Utah. He was born January 20, 1935 in Boise, Idaho to Mary Jeannette Strong and Cecil Melvin Lewin. He spent many happy childhood years in Shoshone, Idaho. After graduating high school, Ray worked for the Union Pacific Railroad with his father who taught him Morse code and he became a telegraph operator. While working with the railroad, Ray came home on the weekends and attended the local dances with his friends. At a dance in Dietrich, Idaho, a cute girl with dark hair and green eyes caught his attention. He fell in love with Phyllis Pitman and they were married in the Logan, Utah temple. They have enjoyed 63 years of a loving marriage. In 1958, Ray served in the U.S. Army for two years. Afterward, he continued working for the railroad while simultaneously working to complete his bachelor’s and master’s degree in mathematics from Idaho State University in Pocatello, Idaho. In 1971, Ray and Phyllis settled in Twin Falls, Idaho where Ray taught math at the College of Southern Idaho for 33 years. With his assurance that math is just a matter of knowing the tricks, he calmed the minds of many anxious math students and became a favorite with a toy rubber chicken that he routinely and casually flopped over the podium. However, he shared that he eventually had to give up the tricks because the students laughed so hard they lost concentration. In the 1980’s Ray learned computer programming and worked for Idaho Computer Company part-time and during the summers for about 25 years. Ray was a devoted member of the Church of Jesus Christ of Latter-day Saints and served in many capacities including bishop, high councilman, and ward mission leader. After he retired from teaching, Ray and Phyllis moved to Salt Lake City, Utah in 2004 and began their service as missionaries serving first as office missionaries in the Zimbabwe, Africa mission; as guest service missionaries on Temple Square in Salt Lake City, Utah; and as Family History missionaries in the Johannesburg, Southeast Africa mission. These experiences created many lifelong friendships and cherished memories, as they loved the people of Africa and the members they served with. All who knew Ray loved his quick wit, dry sense of humor, and ability to tell stories. Often he couldn’t make it through a story without breaking into bouts of laughter before he could go on. With his cheerful personality, Ray was gifted at spreading joy and happiness to those around him. His endearing introduction, “Hi, I’m Ray Lewin. How ya doin?” was unforgettable and opened the door for immediate connection. Ray also had an exceptional ability to instill his sense of humor in writing. His grandchildren especially enjoyed it when Grandpa included a note in their birthday cards. Throughout his struggle with dementia, he remained fun and pleasant and quickly became a favorite with the team of caregivers at the assisted living facility. Ray will always be remembered for his kind heart, gentleness, and love for his friends and family, especially his wife Phyllis, whom he loved dearly. He is preceded in death by his parents and his sisters, Iris Morris and Leslie DuCharme. He is survived by his wife Phyllis, children Craig Lewin (Bobbi) of Fort Collins, CO; Kent Lewin (Carol) of Holladay, UT; John Lewin (Anna) of Cedar City, UT; Lisa DuChesne (Ryan) of Herriman, UT; and Rebecca Whitney (Denton) of Columbus, OH, as well as 23 grandchildren and 5 great-grandchildren. The family’s sincerest appreciation goes out to the compassionate care provided by the staff and healthcare workers at the Ridge of Cottonwood and the team at Utah Home Health and Hospice. Services will be held Monday, May 9, 2022, at the Cottonwood Fourth Ward Building of the Church of Jesus Christ of Latter-day Saints (5565 South Neighbor Lane (1610 E), Holladay, UT 84117). A visitation will be held from 9:30-10:30 with a funeral service following at 11:00 am. Interment will be at Camp Williams, Utah Veterans Cemetery at 17111 South Camp Williams Road, Bluffdale, UT 84065. To view via zoom please click on the link https://zoom.us/j/95696682058

Raymond Glenn Lewin passed away peacefully, surrounded by his family, on April 22, 2022 at the assisted living facility in Holladay, Utah. He was born January 20, 1935 in Boise, Idaho to Mary Jeannette Strong and Cecil Melvin Lewin. He spent... View Obituary & Service Information

The family of Raymond Glenn Lewin created this Life Tributes page to make it easy to share your memories.

Raymond Glenn Lewin passed away peacefully, surrounded by his...