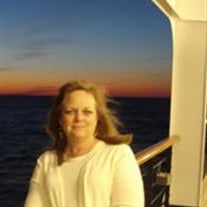 Rebecca Lynne Hubbell, 59, wife, mother, grandmother, sister, aunt, and friend, passed away peacefully at home while surrounded by family on October 5, 2012. Rebecca had battled vigilantly with cancer for about a year. She was born in San Diego, CA, to Larry and Lea Walker. She lived in San Diego until she reached the age of 10, when her family moved to El Cajon, CA. At the age of 19, she married Jack Randall Hubbell in the Los Angeles Temple. While living in Lemon Grove, CA, she gave birth to two children and later moved to Cheyenne, WY, where she had her third child. In 1982, the family moved to Sandy, UT. Four years later, she courageously fought and defeated breast cancer. She always looked for ways to help and serve others. She had many callings in the Church of Jesus Christ of Latter Day Saints and was involved with the PTA. She worked at Tuxedo Junction for over ten years while she raised her family. She later was employed at Stampin' Up!—a place she loved working and continued working up until her time of death. She had four grandchildren who were the joy of her life. Her sweet spirit and innocent belief in the goodness of life will be cherished by all who knew her. She was an example to all and a very loving person, always seeing the good in everyone. She loved the ocean and La Jolla beach, and was always a California girl at heart. She was strong and faithful to the end and had a very strong belief in the gospel. Her example and testimony will sustain those she left behind. She is survived by her beloved husband, Jack; her three children, Audra Chester ( Nathan), Travis Hubbell (Danae), and Laura Miller (Jim); her sisters Janie Lasko (Tom) and Wilma Gess (Brian); her two brothers, Bryce Walker (Eileen) and Lance Walker (Heather); and several nieces and nephews. She was preceded in death by her loving mother and father, and her sister Sandi. Per Rebecca's wishes there will not be a funeral. However, in her honor her family will be hosting an open house at their home on Monday October 8 from 5-8 pm.

Rebecca Lynne Hubbell, 59, wife, mother, grandmother, sister, aunt, and friend, passed away peacefully at home while surrounded by family on October 5, 2012. Rebecca had battled vigilantly with cancer for about a year. She was born in San Diego,... View Obituary & Service Information

The family of Rebecca Lynne Hubbell created this Life Tributes page to make it easy to share your memories.