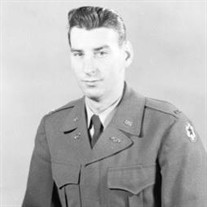 Reilly Campbell Jensen died in the company of family on February 28, 2019, at his home in Provo, Utah, at the age of 89 years. He is the beloved father of seven sons, 24 grandchildren, and ten great grandchildren. Reilly was born with his twin brother in Mesa, Arizona, on March 16, 1929, to Raymond Mahonri Jensen and Mary Campbell. Born at the dawn of the Great Depression, which resulted in the loss of the family’s productive farm and orchards to the banks when the mortgage could not be paid, Reilly remembers his youth primarily as a time of adventure and exploration with his twin brother. The small family spent approximately the first 13 years of Reilly’s life moving from place to place around the southwestern states in a constant search for economic survival and prosperity. Although times were hard and money in short supply, the love and diligent support offered by his parents and extended family ensured that the twins enjoyed a happy childhood where learning and living in harmony with the principles of honesty, charity, and service with faith in God and His Son, Jesus Christ, were always promoted. The family eventually found long-term stability in Moapa Valley, Nevada, with the aid of Reilly’s older half-brother, Kenneth Russell Jensen, who was already established in the community. After graduation from high school in 1947, Reilly attended the University of Nevada at Reno, graduating with a Bachelor of Science double degree in mathematics and chemistry in 1951. He continued his studies at Reno, receiving a Masters of Science degree in 1952. He then spent two years in the US Army as a lieutenant assigned to the Army Chemical Corp and was involved in monitoring radiation and fallout from nuclear weapons testing in the Pacific Islands. In 1954, Reilly married and was sealed in the St. George temple to his best friend’s sister, Eleanor Adams. After receiving his Doctorate degree from the University of Washington in Seattle, Reilly and Eleanor raised their seven sons while living for 43 years in San Diego, California. He retired as a tenured chemistry professor at San Diego State University in 1992. Reilly served diligently in many positions in the Church of Jesus Christ of Latter-day Saints, including Elder’s Quorum President and Bishop of the San Diego 8th Ward. Together, Reilly and Eleanor served two years as leadership missionaries in the Philippines Baguio Mission and two years as humanitarian missionaries in Hong Kong. They then built a home in Provo, Utah. Their homes in both San Diego and Provo were renowned as a place for family reunions and loving nurture of children. After another mission as teachers at BYU Hawaii, Reilly and Eleanor served at the Utah Youth Correctional Facility, Missionary Training Center, and Provo temple. From the humble origins of his itinerant youth during the Great Depression, Reilly embraced the support of his loving family, applied himself to a pursuit of education and provident living, and took advantage of the opportunities afforded by life in the USA. He traveled and saw much of the wide world. He was revered and beloved by all his progeny and by friends that knew him as a hard-working, kind, patient and generous man who consistently sacrificed his time, talents, and means for the benefit of others. Reilly was preceded in death by his wife, Eleanor Adams Jensen; his father and mother; and his half-sisters and brothers, Milford, Alma, Elva, Kenneth, Dora, and Glenn. He is survived by his twin brother, Raymond Steele Jensen (Genae) of Ogden, Utah, and his children, Marcus (Jana) of Logandale, Nevada; Reilly Douglas (Sim) of Provo, Utah; John (Michelle) of Long Beach, Washington; Clair (Lona) of Houston, Texas; Milo (Susan) of Escondido, California; Karl (Heather) of Pleasant Grove, Utah; and Lee (Lisa) of Provo, Utah. A memorial service will be held at the Bonneville 10th Ward chapel, 1498 East 800 South, Provo, on Friday, March 8, 2019, at 4:00 p.m. Reilly will be buried in the Logandale, Nevada cemetery, next to his beloved wife.

Reilly Campbell Jensen died in the company of family on February 28, 2019, at his home in Provo, Utah, at the age of 89 years. He is the beloved father of seven sons, 24 grandchildren, and ten great grandchildren. Reilly was born with his twin... View Obituary & Service Information

The family of Reilly Campbell Jensen created this Life Tributes page to make it easy to share your memories.

Reilly Campbell Jensen died in the company of family on February...