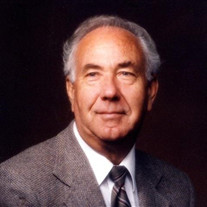 Rex B Kirby 1926 - 2016 Rex B Kirby, beloved husband, father, and grandfather returned to his Heavenly Father on August 30, 2016 from natural causes. Dad was born March 28, 1926 in Grace, Idaho to Delbert and Julia Valeria Bair Kirby. He was the second of six children. When he was 4 years old the family moved to Idaho Falls, Idaho where he spent his growing up years. He was born of goodly parents and pioneer ancestry, loyal and true stalwarts in their faith. Dad was raised during the lean, depression years, and he began working a paper route at age 10. He has had a consistent and dedicated work ethic all his life. He has a deep love of nature and the great outdoors that began in his youth and continued in his vocation and other pursuits throughout his life. Dad enlisted in the U. S. Navy at age 17, serving his country from 1943 to 1946, during World War II. After his honorable discharge, he served an L.D.S. Mission in the Samoan Islands for 2 ½ years. He was the seventh missionary to serve in Samoa after the war and taught at the church schools, worked the church plantations and served the saints. His time in Samoa had a great impact in his life. In 2010 a great dream was realized when he took Mom back to Samoa and showed her the land he so dearly loved. He attended Utah State University in his quest for learning and a career. Dad met the love of his life, Carma Clarke, in 1950 on a blind date arranged by his father. After a short courtship they were married in the Salt Lake Temple Nov. 22, 1950 by Apostle Matthew Cowley. Their union was blessed with 6 children, whom he loved deeply. He devoted his greatest efforts to being a good husband and father. Dad earned his Bachelor of Science Degree in 1954 from Utah State University. He chose to become an educator in the science field, and taught at Montpelier Junior High, Roy Junior High, Sand Ridge Junior High and concluded his teaching career at Bonneville High School. He received his Master of Education degree in 1967. He was an innovative teacher, and organized and began the Summer Outdoor Education Program for the Weber School District. He retired in 1987 after 32 years of influencing for thousands of young people. Dad was always an active member of the Church of Jesus Christ of Latter Day Saints and a gospel scholar. He served in many capacities, always devoted to his callings and the gospel. He served in two Bishoprics, High Council, Young Men, Primary, Sunday School and High Priests, but enjoyed teaching the gospel above all else. He devoted much of his spare time to studying. He had an unquenchable thirst for knowledge. He was a gentle man of integrity, high ideals and love of family. Dad was a dedicated gardener, and found genuine and deep satisfaction in his yard and garden. He loved to share the fruits of his labors with family and friends. He found peace of mind and serenity in his garden, a special place for renewal of body and spirit. Dad was a traveler at heart, always wanting to see new areas, natural resources, and experience first-hand the beauty and wonder of nature. He camped with his family for 66 wonderful years and shared his vast knowledge with each upcoming generation. Dad delighted in being ‘On the Road Again’ as he and Mom started each new adventure. For many years they enjoyed wintering in Yuma, Arizona. He enjoyed the many four-wheeler trips he took with his sons and grandsons. They took great care of him on these trips, showering him with love and concern. Dad is survived by his loving and devoted wife of 67 years, Carma; six children, Marlin (Kathy) Kirby, Jana (Scott) Lawrence, Val (Teri) Kirby, Karla (Holly) Kirby, Ron (Mishy) Kirby and Clair (Angie) Kirby. He dearly loved his 18 grandchildren and 22 great grandchildren. He is also survived by a brother, Bob (Eris) Kirby, sister, Joyce (Shelby) Marcum, and sister-in-law Maurine Kirby. Preceded in death by his parents, and brothers Don Edward and Dell Kirby and sister Virginia. Funeral services will be held 11:00 a.m., Saturday, September 3, 2016 at the Ogden West Stake Center, 2200 S. 4300 W. Taylor, Utah. A viewing will be held at the church on Friday evening from 6-8 p.m and on Saturday from 9:45 -10:45 a.m. Interment in the West Weber Cemetery. The family would like thank Hospice Care of Northern Utah for their kind and compassionate service to our dad. “I marvel at the goodness of life. What a happy, fulfilling, and wonderful journey it has been. My heart overflows with love for Carma, our family and friends. Till we meet again.....”

Rex B Kirby 1926 - 2016 Rex B Kirby, beloved husband, father, and grandfather returned to his Heavenly Father on August 30, 2016 from natural causes. Dad was born March 28, 1926 in Grace, Idaho to Delbert and Julia Valeria Bair Kirby. He... View Obituary & Service Information

The family of Rex B Kirby created this Life Tributes page to make it easy to share your memories.