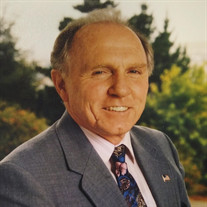 Richard Taylor Barlow beloved husband, father, grandfather, and great-grandfather passed away on October 28th, 2019. He was born August 7th, 1936 to Roy Call and Ellen Taylor Barlow. He grew up in Monroe, UT and graduated from Olympus High School. He was survived by the mother of 8 of his children Karlene Parkin, his wife Beverly Anderson, his children Rick (Laurie), Scott (Hydee), Rob (Dani), Heidi Hansen (Rick), Dirk (Megan), Brent (Wendy), Eric (Angie), Matthew (Amanda), Rachel Gelser, Sarah Byrd (Dave), Lars (Stephanie), Josh (Lori), 67 grandchildren and 22 great-grandchildren. He was preceded in death by his parents, his siblings Thomas, Barbara and Elroy, and his grandchildren Dylan, Bryson, and Crystal. Rich is a member of the Church of Jesus Christ of Latter-day Saints and has as strong testimony of the gospel. One of his most distinct attributes was that he loved to serve the Lord. He accepted a mission call from President David O. McKay to serve on a labor mission to build chapels in the North-Western United States. Further callings of note which he held over the years include Ward Mission Leader, Counselor in the bishopric, Gospel Doctrine teacher, early morning seminary teacher among many others. Family was central to Rich’s life. He loved taking them camping, fishing, hiking, on impromptu adventures, fun trips, Sunday rides and picnics; anything that included quality family time. He was especially competitive at games. He excelled at checkers and his favorite game was Acquire where he usually won. On any given weekend you could see him playing a game of Chinese Checkers with his sweetheart Bev and anyone else he could convince to play. He utilized every opportunity to relate gospel messages to his children during these events. Sunday dinner was time he especially loved to recount and discuss recent lessons. He believed the kitchen table was the center of the Church. Many people looked up to Rich and often sought his advice and counsel. He was looked to as a mentor, teacher, friend and confidant. Through his loving interactions with others he created many lifelong friendships. Everything Rich did he gave it his all and was very successful. He was a hard worker, very dedicated to his endeavors, highly generous as an employer, and treated everyone around him with dignity and love. His respect was well earned. Big ideas were his native way of thinking and believing. He ran several companies in brick and rock masonry. His craftsmanship was impeccable with innovative techniques which lead to widespread influence. He was a national award-winning salesman for Ford Motor Company at one time. His approach to these and all of his endeavors was to be the best at whatever he did; an ideal that he taught to his kids and grandkids and which they now carry on. Funeral Services will be held at the Battle Creek 4th Ward Chapel: 1250 East 200 South, Pleasant Grove, Utah 84062 Viewing – Saturday, November 2, 2019 at 10:00 – 11:45 AM Funeral Services – Saturday, November 2, 2019 at 12:00 p.m. Interment – Immediately following services at Highland City Cemetery 6200 West 11000 North, Highland, UT 84003

The family of Richard Taylor Barlow created this Life Tributes page to make it easy to share your memories.