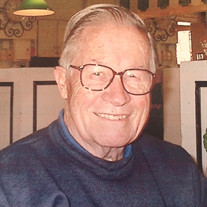 Richard Bills, 93, of Fruit Heights, Utah died peacefully at the Salt Lake City VA Nursing Home on Wednesday, November 7, 2018. Richard was born at home in Salt Lake City to Edith Elizabeth Southgate Bills and Clarence Ivan Bills. He was the older of two children. Just a little over one year after his arrival, his sister Dorothy Mae Bills was welcomed into their loving family. He grew up in Salt Lake City, graduating from South High. He attended several South High reunions and was proud of his continued associations with those he met so long before. He enlisted in the Navy right after high school. While serving, he attempted flight school but found his interest peaked elsewhere and soon transferred to electronic technical school. He honorably discharged on May 9, 1946. With his interest peaked in electronics, he enrolled in the University of Utah and graduated with a degree in Electrical Engineering in June 1949. He began working with Philco. During his employ he had the opportunity to travel much of the United States. He was pleased to have the opportunity to be home based in Salt Lake City while working for Sperry Utah Engineering Laboratory (SUEL). While in the employ of Sperry he met “the most beautiful girl in the world”. He married Shirley Mae Whipple in the Salt Lake City Temple on May 16, 1958. They moved to San Diego a year later and begin their life together which lasted until her death in 1999. Several years into their happy union they adopted two children, a daughter and son, Marta and Bryan. While in San Diego, he worked as an electrical engineer on government contracts necessitating secrecy in all he did. Only later did some of his amazing contributions come to light. His hobbies included photography, reading, anything electrical – mini boats, mini planes, and mini drones. He enjoyed annual family vacations and warm and happy times at the family cabin. He always appreciated a good visit and maintained a strong handshake and warm smile for all. In his opinion, some of his happiest memories are wrapped up with his grandchildren. He loved being a grandpa. He stated often how much he loved his grandparents and wanted to be remembered as someone that his grandchildren could look up to and feel loved by. He succeeded in this role. He attended many soccer, basketball, baseball and football games for Tyler, plays for Jarryd, and dance, piano, violin, and vocal recitals for Amanda and Cali. In 2004, he moved to Utah to help assist Marta and his two granddaughters. He wore many hats and helped with walks to the bus stop, rides to school, endless driving to dance, voice, and piano lessons. He supported his family in every way possible by shoveling snow, mopping the kitchen floor, and listening. He always told it like it was, but never let us down. Richard is survived by his two children – Marta Davis and Bryan Bills. In addition, four grandchildren Tyler (Casey) Gaus, Jarryd Davis, Amanda Davis, Cali Davis and two great-grandchildren Brynlee Paige Gaus and Cooper Douglas Gaus. He is preceded in death by his parents, C. Ivan Bills and Edith Bills, his sister Dorothy Mae Hawkins, his beautiful wife Shirley Mae, and cherished grandson, Jared Cartwright. He loved his family dearly and we loved him in return. I imagine he received a warm welcome from many as he moved on to his next adventure. His family would like to especially thank those who cared for Richard in his last two years. Kathy and Kelly with Brio Hospice as well as the many serving angels with Bristol Hospice; also the loving caregivers with the Salt Lake City VA Nursing Home. Services for Richard will be held Wednesday, November 14, 2018 at 11 a.m. at the Fruit Heights LDS Chapel located at 170 North Mountain Road, Fruit Heights, UT 84037.

The family of Richard Bills created this Life Tributes page to make it easy to share your memories.