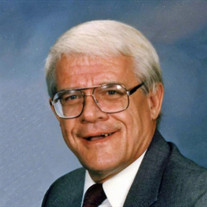 Ogden - Richard C. Davis returned to his heavenly home July 21, 2016 following prolonged illness. Richard was born in Provo, Utah August 22, 1937 to Ralph C. and Verda A. Davis. He was the youngest of 4 children. Through his school years Richard was known as a well rounded student excelling in music, drama, sports and academics. He graduated from Payson High School in 1955. Richard served an LDS mission to the Northwestern States WA, OR and AK from 1957 to 1959. Upon returning home he attended BYU on a Drama/Leadership scholarship, where he also met and married his sweetheart Cary Ellen Nelson. Their marriage was solemnized June 3rd, 1960 in the SLC Temple. Richard graduated from BYU in 1961 with a Bachelors degree in Speech Therapy. Richard loved music and was self-taught on the guitar and many other instruments, often performing locally. Eventually he was joined by two friends who shared his love for music, culminating in the formation of the group called the "3 D's." They quickly rose in popularity, emphasizing LDS folk music and were invited to perform with the BYU Program Bureau/USO tours during the Vietnam conflict. In time, the group decided to perform full-time and embarked on many tours and speaking engagements throughout the United States and Far East. This included BYU Education Weeks nation-wide. Performances were filled with drama, humor and testimonies of family, country and God. Thirteen years and thirteen albums later, the group, now known as the D's, disbanded as the folk era came to a close. Richard moved his family from Orem to the rural town of Huntsville, Utah where he was employed by WSC as the Program Bureau Director 1975-85, highlighting the musical pop rock group "Good Company." He also received his Masters in Communication from BYU in 1984. Richard continued as a WSU administrator from 1985-99 working with the Alumni and Fine Arts Departments. He also served faithfully in numerous church callings. Richard is remembered for his love for running and coaching individual athletes in his track club, including his children, who captured numerous individual state high school track and field championships. His retirement years were spent emphasizing family ties, writing music to poetry, gardening, and working on his mountain property. He blessed our lives with a legacy of music, instilled a love of nature, and though he endured many trials and health issues, he relied upon the Lord and remained faithful in his testimony. On his outdoor adventures, Richard always wanted to know "what was just up the road", hoping for a rewarding display of nature after the effort. He has arrived. Richard is preceded in death by his oldest son, Christian and survived by his companion Cary E. Davis, daughters Camille Tueller, Charlotte Jarnagin, Kelly Hunter, CaryLynn Johnson, son Charles and his 21 grandchildren who will all miss him dearly. Funeral services will be held Friday, July 29, 2016 at 11:00 a.m. at the Huntsville 2nd Ward 277S. 7400 E. A viewing will be held from 9:30 to 10:45 a.m. Internment at Huntsville Cemetery. Send condolences to the family at www. premierfuneral.com.

Ogden - Richard C. Davis returned to his heavenly home July 21, 2016 following prolonged illness. Richard was born in Provo, Utah August 22, 1937 to Ralph C. and Verda A. Davis. He was the youngest of 4 children. Through his school... View Obituary & Service Information

The family of Richard Charles Davis created this Life Tributes page to make it easy to share your memories.