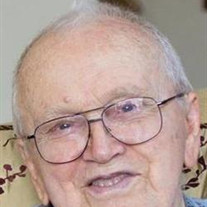 Warren Edwards died peacefully at St. Joseph Villa in Salt Lake City, Utah on Friday, February 13, at the age of 90. Warren was born on November 7, 1924 in Baltimore, Maryland to George and Amanda Edwards. Warren proudly served as an Army medic with the 139th Airborne Battalion, 17th Airborne Division from April 1943 to December 1945 and participated in the Battle of the Bulge. He also served many years in the Army Reserves, achieving the rank of Chief Petty Officer. After WWII, he went to work at General Motors and attended night school at the University of Baltimore where he earned his college degree in business. On May 4, 1951, Warren married Nancy Bowden. Warren worked for many years as a regional sales manager for General Motors and Volkswagen, and later as a real estate agent. In retirement, Warren and Nancy spent many years traveling to all 50 states in the country before moving to California in 1997 and then to Utah in 2003. Warren will be especially remembered by his family as a devoted husband, the best father ever, and someone who never had an unkind word to say about anyone. Warren is preceded in death by his wife Nancy in 2014. He is survived by his three children: Susan Whatley (and husband, John) of Richardson, Texas, Cathy Quinn of South Jordon, Utah, and Doug Edwards (and wife Annemarie) of Riverton, Utah, and three grandchildren: L’il John Whatley, Alysa Edwards, and Sean Edwards. A graveside service is being held 1:00 pm, Friday, February 20, 2015 at Utah State Veterans Memorial Park, 17111 Camp Williams Road, Bluffdale, Utah with a viewing prior to the graveside service at the Veterans Memorial Park Chapel from 12:00 to 12:45 pm. The family would like to thank all the caregivers at St. Joseph Villa and Brighton Hospice for their extraordinary and compassionate care of Warren during the last few weeks of his life.

Warren Edwards died peacefully at St. Joseph Villa in Salt Lake City, Utah on Friday, February 13, at the age of 90. Warren was born on November 7, 1924 in Baltimore, Maryland to George and Amanda Edwards. Warren proudly served as an Army... View Obituary & Service Information

The family of Richard Warren Edwards created this Life Tributes page to make it easy to share your memories.