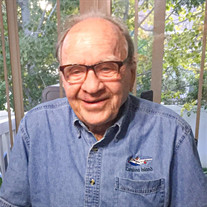 Richard Hubert Fashbaugh of Clinton, passed away September 19, 2021 surrounded by family. Dick was born on September 1, 1923 in Monroe, MI. His 98 years included World War II, college, gymnastics, teaching, and music. He served as a communication specialist in the US Navy during World War II aboard the USS McGinty. After the war, Dick worked as an engineer at Port Hueneme Naval Base in California. A very smart man, he studied at the University of Michigan and the University of Colorado in Boulder, ultimately earning a PhD. in mechanical engineering. Dick was an accomplished member of the gymnastics team while at the University of Michigan holding many records. His mind was always working. Dick specialized in aerodynamics, held patents that solved engineering problems, and built his own fixed-wing airplane. Dick married Marilyn in Ventura, CA in 1975. He became a professor teaching at the University of Nevada in Reno. He affected lives of hundreds of students during his 17 years of teaching mechanical engineering. He and Marilyn retired to the Oregon coast, where Dick took up the saxophone and clarinet again, playing big band music in a performing group for 15 years. He was an avid golfer sharing this love with his grandkids. Dick was a golfer, but it was his wife that got the hole in one. In 2007, Dick and Marilyn moved to Utah to be closer to family. When family remembers him, they will always think of his famous homemade spaghetti dinners—and his grandchildren loved his homemade pancakes (even though he gave all the credit to Bisquick). Dick is survived by his wife Marilyn, his children Laurie (Greg) Neal, Brian (Lorie) Easter, David (Frankie) Easter, Lynn Dell Swapp, his 14 grandchildren, 19 great grandchildren, nieces and nephews. He is preceded in death by his brother Howard Fashbaugh, Sister Evenly Duval, and son in law John Swapp. The family would like to thank Sunridge assisted living for their great care. Services will be held Friday September 24, 2021 at 11:00 am at Premier Funeral Services 5335 S 1950 W Roy, Utah. Viewing will be preceding the funeral from 10:00-10:45.

The family of Richard Hubert Fashbaugh created this Life Tributes page to make it easy to share your memories.