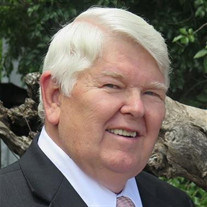 Richard Kent Francis 1942-2017 Richard Kent Francis passed away Sunday May 14, 2017. Born March 4, 1942 in San Diego, California to Reed and Leslie Loveridge Francis. He is the first born of 9 children. Kent graduated from San Jose State University with a Bachelor of Science in Engineering Management, and a Master of Science in Cybernetics. He worked for IBM for 24 years. He then became a Programmer Analyst/Consultant for his own company, Cybernetic Solutions for 13 years. After a cruise, he became an independent travel agent. Kent dearly loves his children and grandchildren and is proud of their accomplishments. Kent married Mary Jane who is the mother of his five children. They divorced and he then married Judith Turnidge who preceded him in death in 2014. He then married his soulmate, Jani Lee McCullough in the Oquirrh Mountain Temple in 2015. They spent every minute together knowing his time left here was short. Jani loved and cared for him until his death. Her children, grandchildren and great-grandchildren have grown to love him in his short time with them. Kent served in the LDS faith as a missionary in Chili and in the Salt Lake Inner City Mission, a Temple Ordinance Worker, in Bishoprics, in High Councils, and various other positions within the LDS Church. He always considered himself a missionary. He has a great knowledge of the Lord’s scriptures and the Plan of Salvation. Kent is survived by his 5 children Holly (Tom), Laurinda (Robert), Janey (Jeff), Aaron, Kevin (Elle), both of his parents, one sister JT (Josie) and 6 brothers Marvin (Jane), David (Toni), Robert (Dorothy), Jay (Heidi), Sam (Marilyn), Steven (Desiree). He is preceded in death by his sister, Joann Francis Dover (Mike). “I will miss you sweetheart” Jani Funeral services will be held Friday, May 19, at 11:00 a.m. at the Sunset Ridge 1st Ward LDS Church, 8107 S. 6700 W. West Jordan, UT. Viewings will be held on Thursday, May 18, from 6:00 - 8:00 p.m. and Friday morning from 9:30 -10:45 a.m. at the Sunset Ridge 1st Ward LDS Church. Interment will be at Valley View Memorial Park, 4335 W. 4100 S. West Valley, UT.

The family of Richard Kent Francis created this Life Tributes page to make it easy to share your memories.