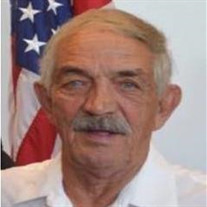 Richard James “Jim”Halvorsen 1944 - 2017 Richard James “Jim” Halvorsen was given the gift of life on Saturday, October 28, 1944. Jim then used that gift well for 73 years and finally gave it back, a bit worn out, on Wednesday, November 22, 2017 surrounded by family and friends. Jim lived an honorable life serving his country in the United Stated Army from 1964 to 1971 and then his service continued in his community as a revered Salt Lake City Firefighter from 1971 to 1996. Dad told us that he wanted his obituary to describe his love for his children, James Todd (Antoinette), Richard Rian (Tracie), Charlie Davin (Marcee) and Andrea as well as 17 grandchildren. He also wanted his love and appreciation of the rest his family and friends to be made known, especially his sister Janice (Tom Baker). Over the past four-weeks battling cancer, there were many, “I love yous” and “Thank yous” and prayers exchanged along with wisdom and stories shared. Being notoriously tough, Jim made his stage 4 cancer look bad by ignoring it completely for months, taking the occasional aspirin instead of surrendering his busy lifestyle for a single moment longer than necessary. Dad married, a few women; Linda, Sallie, one other woman, and then settled into retirement with Becky who was by his side through his hospitalizations. Dad passed many values on to his descendants as well as his peers, fortitude and love were his final lessons. He also taught us outdoorsmanship, hunting, fishing, boating, and service to our neighbors. Our hero, Jim, was preceded in death by remarkable people including his parents Charlie and Maxine, his brother Kent, sisters Charlene and Dawn, Dawn’s husband Dick, and his nephew Jim and niece Holli. A private memorial event will be announced to Jim’s family and friends for Saturday, December 9, 2017 prior to internment at the Utah Veterans Cemetery and Memorial Park. In lieu of flowers or contributions, please do something kind for a person in need and mention “Jimmy, one hell of a fireman.”

The family of Richard James "Jim" Halvorsen created this Life Tributes page to make it easy to share your memories.