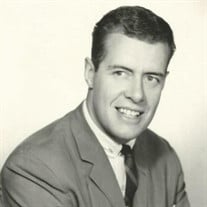 Richard “Poppy” George Morehouse 1944 - 2021 “Poppy” Richard George Morehouse, 77, passed away on May 22nd, 2021. Ric was born with a fishing rod in his hands May 12, 1944 to George and Gladys Morehouse in Calgary Alberta, Canada, and was the youngest of 3 sons. While a teenager Ric met 2 fishermen, or fishers of men, who introduced him to, and then baptized him as a member of the Church of Jesus Christ of Latter-Day Saints, to which he remained a faithful member for the remainder of his life. When his father found out he had been baptized a “Mormon”, he told him “If you’re going to be a Mormon- be a good one. Stick to it.” So he set about his life with that in mind, starting by attending Brigham Young University in Provo UT. While a good student, he also enjoyed ‘fishing for a wife”, but ended up throwing them all back in the water upon deciding to serve a full-time mission. He served in the New Zealand South mission from 1965 to 1967. Having fallen in love with New Zealand, it’s people and the fishing possibilities, he decided to stay in country following the completion of his mission. And kept fishing. Eventually, he caught himself the most beautiful of all ‘fish’…. A Maori Wahine. He married his beautiful wahine, Aotaumarewa Lorraine Elkington in the New Zealand temple February 23rd 1968. But, even fishermen of great renown can’t live on fish alone. So, he went to work. Ric worked as a Credit Control Manager for Birdseye, a Prison Guard and a Probation Officer before transitioning to working the Church Educational System building up the Seminary and Institute programs in New Zealand and the South Pacific. He went fishing in many waters for both fish, and souls, building the Kingdom and feeding them fish. He worked in the Church Educational System for 17 years, moving from the warm waters of the South Pacific, back to cooler lakes and rivers of Lethbridge Alberta, Canada. He finished two Bachelors Degrees at BYU and did his Master’s Degree in Business at Utah State University, all while raising his 6 children with his wife. It’s a toss up as to which of these 3 things exhausted him more. Fishing was his release. Once Ric graduated with his Master’s Degree, he moved his family to Washington state where he eventually ended up working for the state as a Probations/Corrections Officer. Catching but not releasing. He loved Washington, green and rainy like New Zealand, with an ocean to boot. The fishing menu expanded from river trout and catfish, to salmon, crabs, clams, geoduck, oysters, flounder, halibut, cod and the occasional shark. The fishing stories expanded in like kind, getting bigger and bigger… but Ric could tell a great story. While fishing was his number one sport and favorite pastime, Ric also enjoyed football and the Seattle Seahawks. He enjoyed telling stories and jokes (sometimes one and the same thing), spending time with his family, on the water if possible, or serving people in any way possible, especially writing letters to all the missionaries in his NZ stake. He served in many church callings over the years, from Primary Teacher, to the Youth program to Bishop, or Service Coordinator. He loved and exceled in each of his callings- just as his father had admonished him to do – “If you’re going to be a Mormon, be a good one” Ric was preceded in death by his parents, George and Gladys, step-mother Helen, and both brothers. He is survived by his wife Ao, (Lorraine), his 6 children Adam and wife Nicola, Jodelle and husband Junior, Lara and husband Erick, Rhett and wife Jana, Helen and husband Alex, Desiree and husband Kaniela. He leaves behind a legacy of 24 grandchildren -Leah, Story, Arama and Griffin, Jadyn, Jaeger, Joa and Jinjer, Brenda, Hemi, Porter, Isabella, Sophia, Aleah, and Rocco, Alex, Helaman, Rainey, Hinckley and Ari, Kien, Aneia, Amara and Zealand. For a fisherman, that is the best haul of all! In his honor, on Wednesday, May 26, 2021 a viewing will be held from 9:30-10:30 am followed by the funeral at 11:00 am. Services will be held at the Samoan Orem 13th Ward, Latter-day Saint building located at 150 East 600 North, Orem Utah. Ric will be laid to rest at the Orem City Cemetery located at 1520 North 800 East, Orem Utah.

The family of Richard "Poppy" George Morehouse created this Life Tributes page to make it easy to share your memories.