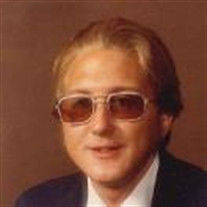 Richard Dean Putnam, left this mortal life September 6, 2018 as the result of an automobile/pedestrian accident. Rick or “Ricky”, as he was affectionately known from his childhood, lived his life without guile. He had many reasons to complain and make excuses. He never did. He lived a simple but meaningful life. Although he stayed to himself much of the time, his example of hard work, appreciating simple things and excitement for menial work are the gifts that he has left here for the rest of us to learn from. Rick proudly worked at Denny’s Restaurant for over thirty six years. He used public transportation, rain, snow or shine to get to and from. It was not uncommon to see him with a frost riddled beard from the cold as he came into the house. He would simply say “It’s a cold day today” and leave it at that. Never complaining, just grateful to have a job. He was never late and in fact often arrived early to read the newspaper and catch up on the sports scores from the previous day. Rick was an avid Utah Jazz and BYU Cougars fan. He could recall statistics, players, coaches, from any and all games and seasons. He loved to talk sports with anyone who would listen. He had a remarkable memory. He could also recall years, actors, awards and plots of nearly any movie from any era. He was genius in his own right. Rick graduated from West High School and was proud of this. Upon receipt of his belongings after the accident, He had each of his West High School student identification cards. He was proud to be a Panther. Rick also competed in the special olympics. He was the recipient of winning medals, shot put and sprints. We are happy for Rick to be made whole. He had his mortal limitations, of which he made the most of. We love him and will certainly miss his routines. His Friday 7:10 am laundry washing, His Sunday 9:00 am Spoken Word blaring from his TV. His detailed grocery lists. His simplicity, his life. We loved Rick and the example he has set for all who knew him. Sometimes simplicity isn’t appreciated until tragedy reminds us. We are grateful for his life of simplicity, for we all can learn from him. Rick is survived by his loving, mother Adele Putnam, his siblings Bill, Linda, John (Ruth), Virginia, many nieces and nephews. He was preceded in death by his father David Putnam, and brother Ronald Putnam. A small graveside service will be held Thursday September 13, 2018 at the Elysian Burial Gardens, 1075 E 4580 S, Millcreek, UT. for friends and family. A donation account has been set up to assist with Rick’s unexpected funeral costs. https://www.gofundme.com/rick-putnam-funeral-fund

Richard Dean Putnam, left this mortal life September 6, 2018 as the result of an automobile/pedestrian accident. Rick or &#8220;Ricky&#8221;, as he was affectionately known from his childhood, lived his life without guile. He had many reasons... View Obituary & Service Information

The family of Richard Dean Putnam created this Life Tributes page to make it easy to share your memories.