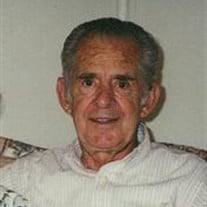 Richard (Dick) William Henderson, beloved husband, father and grandfather, passed away at his home in Provo, Utah on July 24, 2011 surrounded by his loved ones. He was born to Riley and Georgia Henderson, July 7, 1932 and raised in Canyonville and Eureka, UT. He graduated from Tintic High in 1950 and served in the US Army from 1952-1954, half of which was on Korean soil as an infantryman. He married his sweetheart, Tamara Lee Underwood on October 27, 1956 and they moved to Provo soon thereafter. Together they raised four children: Kim (Greg) Carter, Greg, Pam (David) Pappas and Teresa (Mike) Eastman. He was the “funnest” dad on the block by initiating water fights, building swing sets, sandboxes and other playground equipment in the family backyard. Dad loved to fish and would spend his entire vacations taking his family to Strawberry Reservoir. He loved to embarrass his girls by acting crazy when our dates would arrive, hoping they wouldn’t return. He was a member of the LDS church and accepted the calling as the scoutmaster which resulted in many young men achieving the rank of Eagle Scout. Later in life, his interest changed to camping which resulted in many fond memories from his grandchildren. Dad was a master drapery hanger. Most of the rooms in any BYU dorm still display his workmanship. He was an avid BYU sports fan and could be found on game day watching the JAZZ on TV and listening to BYU on the radio simultaneously. He enjoyed reading Louis L’Amour novels, church history books, and anything from the “old west”. His mind, his wit and his sense of humor were sharp right up to the end. He is preceded in death by his mother; step-father, Sterlin Laird; two brothers, Mack and Jerry and one grandchild, Christopher Eastman. He’s grandpa to eight grandchildren and twelve great-grandchildren. Friends and family may visit Dad at the LDS chapel at 131 S. 1600 W. Lakeview 8th Ward from 6-8 pm on Friday, July 29, 2011 and at the Eureka LDS chapel on Main Street in Eureka, UT. at 10:00 am Saturday, July 30, 2011 followed by a graveside service at the Eureka Cemetery. The family would like to extend a special thanks to all of the care providers assisting with his care and Vistacare Hospice for helping us care for him in his last days. Always remembered…always missed.

Richard (Dick) William Henderson, beloved husband, father and grandfather, passed away at his home in Provo, Utah on July 24, 2011 surrounded by his loved ones. He was born to Riley and Georgia Henderson, July 7, 1932 and raised in Canyonville... View Obituary & Service Information

The family of Richard "Dick" William Henderson created this Life Tributes page to make it easy to share your memories.